Fiesta time in the Cuban capital

(CNN) -- Havana has a thriving cultural scene and is the setting for world-class ballet and film festivals. But it's also a city of music, sunshine and rum, and Havana knows how to throw a damn fine party. Here are some of the city's biggest and best annual events. 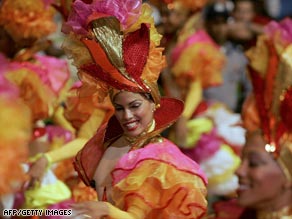 Dancers parade along the Malecon for the Havana Carnival.

May Day (May 1)
Hundreds of thousands of cheering people march through Havana to celebrate International Workers' Day. This quintessentially Cuban event offers a fascinating insight into a country where politics is woven into every aspect of daily life.

Marching Cubans carry placards past images of communist heroes like Marx and Lenin in Plaza de la Revolucion square. The fact that the whole occasion is carefully stage managed by party officials adds to its uniquely Cuban air.

Havana Carnival (August)
One fiesta just isn't enough for a city like Havana, so the Cuban capital has two annual carnivals. There's the smaller event in February, which is well worth checking out, but to experience the real deal you're better off waiting until summer.

Crowds pack the Malecon in the final two weeks of July and the first two weeks of August to hear some of the island's finest musicians performing al fresco. The final weekend sees a colossal parade make its way from Habana Vieja to the Malecon in a swirling mass of conga lines, skimpy outfits, music and dancing -- accompanied by lashings of rum.

Look out too for the "Munecones", huge satirical figures of various famous faces, accompanied by the "faroleros", dancers who twirl brightly colored standards as they parade along the Malecon.

The International Havana Ballet Festival ( October/November, every other year)

This festival brings together international stars and prestigious companies from around the world, as well as showcasing the renowned National Ballet of Cuba, which has produced the likes of Alicia Alonso and Carlos Acosta.

The festival has showcased more than 200 world premieres and performances range from classics like Swan Lake to challenging modern pieces. One of the highlights of the festival is the choice of venues, ranging from the faded grandeur of the Gran Teatro de La Habana, the city's opera house, to open-air performances in Old Havana, where the subtly-lit facades of colonial palaces provide a wonderfully romantic backdrop.

What do you think are Havana's seasonal highlights? Let us know below.

Havana Jazz Festival (Winter)
Cuban music has played a huge role in the development of jazz, with musicians like Chano Pozo exporting Cuban rhythms to the U.S. to create the fusion known as Latin Jazz.

Cuban jazz maestro and five-time Grammy winner Chucho Valdes organizes the festival and is a regular performer, along with a host of international names. Past events have featured the likes of Dizzy Gillespie and Max Roach and the present-day lack of U.S. stars is more than made up for by an impressive contingent of Latin American talent.

There are performances at The Hotel Rivera, Casa de la Cultura Plaza, Teatro Nacional de Cuba, Teatro Amadeo Roldán and various smoky clubs. Although the jazz festival is usually held in December, the 2009 event took place in February, so if you're planning a visit be sure to check the dates well in advance.

The Festival of New Latin American Cinema (December)
This 10-day festival is one of the biggest events in Latin American film, which is currently producing some of the finest cinema in the world. Movie buffs from all over the island flock to see an impressive selection of movies, ranging from Spanish-language blockbusters to obscure art flicks.

Even if your Spanish isn't good enough to fully understand the films being shown, the festival still offers the chance for a bit of celeb spotting. Past attendees have included the likes of Robert de Niro, Robert Redford, Jack Nicholson, Steven Spielberg and Pedro Almodovar.