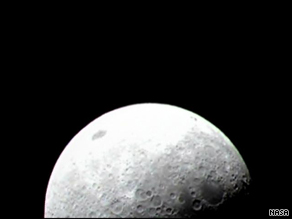 An unmanned NASA spacecraft captured this image of the moon from about 5,000 miles away Tuesday.

About two hours later, the Lunar Crater Observation and Sensing Spacecraft (LCROSS) swung past the moon on its way into an elongated Earth orbit. The spacecraft sent streaming video back to Earth, shown on a NASA Web site, for an hour as it passed the moon.

The two spacecraft lifted off June 18 atop the same Atlas V rocket. The mission is the first in NASA's plan to return to the moon, then travel to Mars and beyond, the space agency said.

During the mission, the agency will collect all sorts of data, including day-night temperature maps, NASA said. There is particular emphasis on the polar areas of the moon, where sunlight is more plentiful and where water might exist.

The LCROSS is scheduled to crash land on the moon Oct. 9 to search for the presence of water ice in a permanently shadowed crater at the moon's South Pole.

The data that the LRO collects and sends to Earth also will be used in planning an eventual lunar outpost, the agency said. During its mission, the orbiter also will spend at least a year looking for potential landing sites for astronauts.