(CNN) -- You've probably heard of a shooting star. But a shrinking star? 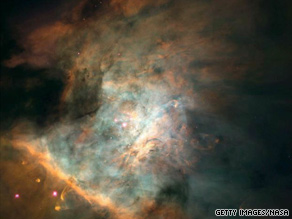 A star in the Orion constellation, near the nebula shown here, is thought to be shrinking.

That's what researchers at the University of California, Berkeley, said has happened to the red supergiant star Betelgeuse.

Almost the brightest star in the Orion constellation and visible to the naked eye, Betelgeuse (pronounced "beetle juice") has shrunk 15 percent over 15 years, and scientists have said they have no idea why.

Betelgeuse, about 600 light-years away according to NASA, has lost in its radius a distance comparable to the orbit of Venus, according to Townes.

Townes, who won the 1964 Nobel Prize in physics, began measuring the red giant 20 years ago, he said. He uses one of his own inventions, an Infrared Spatial Interferometer first completed in 1988, which consists of three telescopes with base lines of 4, 8 and 12 meters.

Over the past 15 years, Townes said, Betelgeuse has shrunk in diameter more rapidly each year. It is the first time, using a consistent measuring tool, that scientists have noticed a marked change in the size of the red supergiant, said Berkeley physicist Edward Wishnow, who has studied the star with Townes for three years.

A variety of measuring tools exist, Wishnow said, but other scientists have not observed a similar change.

The other part of this sci-fi mystery is what happens next. Although shooting stars aren't actually stars at all -- they are meteoroids -- red supergiant stars are stars, and those like Betelgeuse are not known to change in size, Townes said.

But varying brightnesses of red supergiants have been recorded, and as stars become smaller, they tend to become brighter as they become hotter. However, as Betelgeuse has shrunk, it has not changed in brightness, Wishnow said.

All the scientists have now are unanswered questions.

"Is it going to collapse or explode? It's a surprise," Townes said. "If it shrinks, it might get brighter because it'll get hotter, or it might explode and get brighter. If it explodes, well, it might produce a lot of gas, and a lot of stuff would be thrown out. It might then be a very small bright star, or it might even be a black hole. An explosion would be very surprising."

For now, scientists will keep their eyes to the sky.

All About NASA • University of California-Berkeley