(CNN) -- The space shuttle Atlantis crew completed its first spacewalk to upgrade the Hubble Space Telescope, a daylong act of grueling labor that featured the replacement and installation of key instruments. 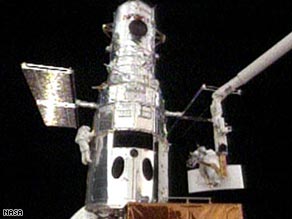 Spacewalkers remove a camera from the Hubble on Thursday.

Astronauts John Grunsfeld and Drew Feustel removed the Wide Field and Planetary Camera 2 and swapped it out with an updated model, a device that "will allow the telescope to take large-scale, clear and detailed photos over a wide range of colors," NASA said.

But they had a tough time removing a bolt in that task, an issue that caused some concern for colleagues on the ground. They eventually released it.

The team also replaced a Science Instrument Command and Data Handling Unit, a computer that "sends commands to Hubble's science instruments and formats science data for transmission to the ground," NASA said.

The team "installed a soft capture mechanism, a device that will allow future vehicles to attach to the telescope," NASA said.

And they installed "a combination of locks and latches that will allow for faster opening and closing of the telescope doors during the third spacewalk."

"This is a huge accomplishment," Preston Burch, Hubble Space Telescope program manager, said during a briefing. "Our first EVA day in more than seven years." EVA is the acronym for "extravehicular activity," the phrase for spacewalking.

It was the first of five spacewalks scheduled during the 11-day mission in which the crew will work in the shuttle's cargo bay to upgrade and repair Hubble.

Astronauts Michael Good and Mike Massimino will perform the next spacewalk on Friday. They will be installing gyroscopes and batteries.

The mission is one of the most ambitious space repair efforts ever attempted.

After a two-day chase, the shuttle captured the telescope Wednesday with its robotic arm some 350 miles above Earth and pulled it into Atlantis' cargo bay for service.

It's been seven years since the last space shuttle crew worked on the telescope, which has been latched to a rotating, "lazy Susan"-type device for five days of repairs and remodeling.

A camera mounted on the shuttle's robotic arm, 200 feet from the telescope, is taking pictures of it -- the first time the telescope has been seen since March 2002.

An umbilical line was connected to provide electricity from Atlantis to the telescope, according to NASA. Mission commander Scott Altman also will position the shuttle to allow Hubble's solar arrays to gather energy from the sun and recharge the telescope's batteries.

The timeline for the spacewalks is so tight, there's a chance the astronauts won't get everything done, especially if they hit any snags. And that's a real possibility because some of the repairs they are attempting have never been tried before.

NASA canceled an Atlantis mission to extend Hubble's operational life in January 2004 because the trip was considered too risky in the wake of the 2003 space shuttle Columbia disaster, which killed seven astronauts.

That accident was blamed on a hole punched in the front of the wing by debris during liftoff. But public pressure and steps taken to increase shuttle safety led the space agency to reconsider.

Hubble's "greatest discoveries," NASA says, include determining the age of the universe -- 13.7 billion years, discovering that "virtually all major galaxies have black holes at their center," and "providing evidence that the speed at which the universe is expanding is accelerating -- caused by an unknown force that makes up for more than 75 percent of the universe."

CNN's John Zarrella and Kim Segal contributed to this report