(CNN) -- It's not quite the achievement of a lunar landing, but astronaut Mike Massimino made Twitter history with a 139-character post to the micro-blogging site -- the first person to do so from space. 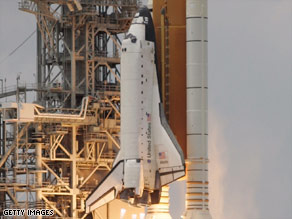 A seven-member crew aboard space shuttle Atlantis is headed to the Hubble Space Telescope to make repairs.

"From orbit: Launch was awesome!! I am feeling great, working hard, & enjoying the magnificent views, the adventure of a lifetime has begun!" he wrote at 4:30 p.m. ET Tuesday.

With the tweet, Massimino kept his promise to file updates from the space shuttle Atlantis as it readies to repair the Hubble Space Telescope.

Massimino began tweeting in early April as he prepared for the mission. By early Wednesday, his Twitter feed, astro_mike, had more than 241,000 followers.

Atlantis launched Monday afternoon with Massimino and six other crew members. It is NASA's fifth and final repair visit to the Hubble. The crew was expected to arrive at the space telescope on Wednesday.

"I'm going to put my spacesuit on, next stop: Earth Orbit!!" Massimino posted on Twitter on Monday morning before the launch.

Ironically, another Twitter user, astromike, has tweets that are more down-to-earth: "House-cleaning day. I dusted everything that has a horizontal surface," and "Will make "blender waffles" when the girls wake up. From whole wheat kernels to waffles in 10 minutes!"

Another astronaut, Mark Polansky, is posting Twitter updates as he prepares for the next planned space shuttle mission to the International Space Station.

Polansky, who is tweeting as astro_127, will be the commander of the mission, scheduled for June.