KENNEDY SPACE CENTER, Florida (CNN) -- With space shuttle Atlantis on its way to upgrade the Hubble Space Telescope, that leaves one shuttle, Endeavour, at the ready on the other launch pad here. 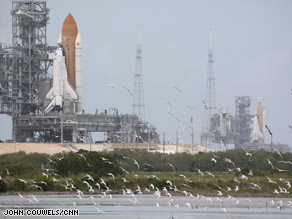 And that's where everybody at NASA wants it to stay.

"We have high confidence that we're just having that thing over on pad B to make it look nice," said mission flight director Tony Ceccaci.

Endeavour is far more than a postcard picture -- it's on standby in case something goes seriously wrong with the Atlantis mission. For example, NASA has estimated there's a 1-in-221 chance the shuttle could be struck and crippled by orbiting space debris.

If such an incident were to thrust the seven Atlantis astronauts into danger, Endeavour would blast off within days in a last-ditch attempt to save them.

Endeavour Cmdr. Christopher Ferguson believes his crew is up to the task.

"I feel as confident about our ability to pull this off, if need be, as I would any other mission," he said.

The idea of a standby rescue spacecraft grew out of the 2003 Columbia disaster, in which that shuttle disintegrated over Texas during re-entry into the Earth's atmosphere.

But until now, there's been no need. All the previous missions since Columbia have gone to the International Space Station. The crew of a damaged shuttle could take refuge there for months if need be until another shuttle was readied to retrieve them.

But Atlantis is going to Hubble, whose orbit isn't anywhere near the space station. If their spacecraft malfunctioned, the seven-member Atlantis crew would have to survive aboard -- probably for days -- until they could be rescued.

"In this case it's a much shorter fuse," Ferguson said. "Consumables like food and oxygen would run out quickly. So the reason we've gotten this crew trained and spooled up and ready to go on literally a moment's notice is because they [Atlantis's crew] have no place comfortable to go stay for a long period of time."

But the rescue would be no cakewalk. Endeavour would need to pull up underneath Atlantis and hook on to the other shuttle using its robotic arm. Over the course of two days, the seven Atlantis astronauts would spacewalk over to Endeavour by holding on to a tether line strung between the two spaceships.

Atlantis mission specialist John Grunsfeld would go first -- and, actually, twice. Grunsfeld would spacewalk to Endeavour, grab an extra EMU (extravehicular mobility unit) spacesuit and take it back to Atlantis. He would then return to Endeavour with one of the Atlantis astronauts not trained in spacewalking.

With the Atlantis crew safely aboard, Endeavour would pull away and begin preparing to head home.

Atlantis Cmdr. Scott Altman said that knowing Ferguson and the other three members of the Endeavour crew are ready in case of an emergency gives him peace of mind.

"Even in the worst-possible imaginable case, we can stay up there and last until somebody comes up and gets us," Altman said. "So it feels like we have all our bases covered."

So what would happen to Atlantis? Ferguson said mission leaders would prepare the crippled shuttle for what they call a "disposal burn" -- a safe, remotely controlled landing of Atlantis.

"If it comes to it, we certainly don't want a space shuttle coming in over a populated area," he said. "So we want to control the burn so it does end up in the ocean."

In all, eleven astronauts would be stuffed into Endeavour. A space shuttle has never carried that many. The four Endeavour crew members would hang out in the flight deck, while the seven Atlantis astronauts would squeeze into the mid-deck area.

The journey back to Earth would be uncomfortable. But Ceccaci, the flight director, says that wouldn't matter as long as everyone was safe.