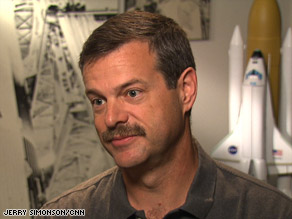 Scott Altman is commander of the current space shuttle mission to upgrade the Hubble Space Telescope.

Scott Altman laughs when he answers the question.

"Flying a space shuttle is a little more challenging than what we did in the movie, although the flying was a lot of fun," said Altman, who knows more than a little about both.

The retired Navy F-14 fighter pilot is the commander of the current space shuttle Atlantis mission to repair and upgrade the Hubble Space Telescope. He also doubled for the actors, including Cruise, during the Southern California shoot of the 1986 hit movie.

Then a young pilot, Altman had just gotten back from a 7½-month tour onboard an aircraft carrier when he got the "Top Gun" call from his commanding officer.

"The skipper of our squadron picked four guys he thought he could trust to have this kind of carte blanche to break the rules a little bit," Altman said. That included a scene in which a brazen Navy pilot buzzes the base's control tower. That would never happen in real life, Altman said.

The movie features Cruise as a young naval aviator, Pete "Maverick" Mitchell, selected to attend fighter-pilot training school at the then-Miramar Naval Station north of San Diego. To prepare for the film, Cruise flew in the backseat of an F-14 several times, including once with Altman.

"The actors were all pretty easy to get along with. Tom Cruise, for example, was very motivated," recalled Altman, who is making his fourth trip into space this week. "He enjoyed flying. He listened to what we told him and became a pilot himself after that."

Altman is not one to brag about his flying in "Top Gun." The U.S. space agency, NASA, doesn't mention his film heroics, either. But Altman is in one of the movie's most memorable scenes. While flying upside down, inverted, Altman gives an obscene gesture to the pilot of an enemy plane.

"They said go ahead and gesture at the other airplane," said Altman, 49, with a smile. "So when you're looking at the scene where he's communicating with the Russian, or the bad-guy pilots in the movie, that would be my finger."

But the flying scenes with the actors didn't all work out as director Tony Scott had hoped.

"The director had to pay $7,600 an hour to rent an airplane," Altman recalled. "But after a week of spending that much money on the airplanes, he decided he couldn't use the footage. The actors all looked a little green, he said."

Altman and the other pilots earned $23 a day for their trouble.

But his biggest disappointment was not getting to see the film as soon as it was released. He and the other pilots were invited to a preview screening, but a commanding officer would not let them go.

And by the time the movie hit theaters, Altman was busy. He was overseas, on another seven-month tour of duty.