(CNN) -- My taxi driver is telling me about his meal last night. His name is William. He ate whale. 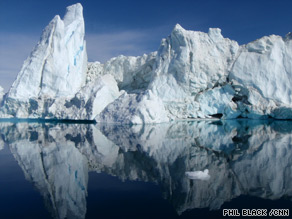 "Delicious," he says, kissing the tips of his fingers on one hand, making the universal sign for good tasting food.

William tells me he went out on a boat with some friends a few days ago and shot the whale. I'm not sure how I feel about this.

Welcome to Greenland. On this remote but enormous island subsistence whale hunting is allowed.

This was just the memorable start to an extraordinary journey.

Cameraman Neil Bennett and I had traveled to the small town of Tasiilaq in southeastern Greenland to meet up with the Arctic Sunrise, a ship belonging to the environmental group Greenpeace. Read Neil's blog on filming in challenging conditions

The 34-year-old icebreaker and its crew are on a three month expedition around Greenland's coast. They say their mission is to help scientists working in the region and to publicize the environmental changes taking place here.

We join the Arctic Sunrise as it moves slowly up Sermilik Fjord. This is simply the most beautiful place I've ever seen. It's an inky blue body of water thick with floating, ancient ice.

Some of the icebergs are mountainous. They all come from the Greenland ice sheet, a vast mass of frozen fresh water, hundreds of miles across and up to two miles thick.

View the gallery of the stunning landscape »

Over the next four days we observe independent scientists working to understand why the ice sheet is melting so rapidly.

We fly over and land on Helheim Glacier, a major outlet for the ice sheet which has sped up dramatically in the last decade.

We accompany oceanographers in inflatable boats as they collect data on the warming water currents in the fjord. All this research, they say, points to sea levels rising beyond current predictions.

There are still those who question humankind's role in the warming of the Earth's climate, but these scientists are not among them.

"Things could be very bad," glaciologist Dr Gordon Hamilton tells me. "If we don't start to do something about it now we'll very quickly reach a tipping point from which there'll be no return. And the consequences for society as a whole would be catastrophic."

Joining Greenpeace on this expedition was a difficult decision for CNN. Does it compromise our editorial independence on what can still be a highly divisive issue?

In my experience it's no different to embedding with soldiers on one side of a military conflict. I've traveled with American soldiers in Iraq and Russian soldiers in Georgia. It enables journalists to access newsworthy locations and people that we couldn't get to otherwise, either practically or safely. And the stories told can still be balanced and fair.

Traveling with Greenpeace allowed us to record powerful images of Greenland's accelerating melt. And we met independent scientists who believe the world must act boldly to slow down change that science is struggling to keep pace with.