GREENSBURG, Kansas (CNN) -- On May 4, 2007, a monster tornado tore through this rural town, killing 11 people and leaving little more than empty slabs and stacks of debris. Greensburg, 109 miles west of Wichita in south-central Kansas, faced the daunting task of rebuilding from scratch. 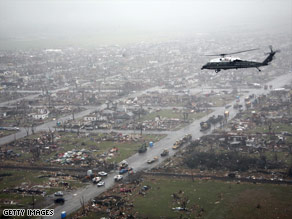 Like most residents, Greensburg City Administrator Steve Hewitt lost his home and everything he owned. But Hewitt believes the tornado had a silver lining, for it made this town of some 1,400 people regroup and reinvent itself.

"To change the way we are going. To reverse the trend. To not lose the kids, but to bring our kids back. To invest back in the community so that after they graduate they can have new jobs and new opportunities."

Watch how the town has recreated itself »

Two years later, Greensburg is taking its name to heart and striving to become a green community of the future. City and county officials, residents and business owners are leading by example, making Greensburg a national model for environmentally conscious living.

This new approach is even touted in a slogan on the home page of the town's Web site, which reads, "Greensburg: Better, Stronger, Greener!"

Daniel Wallach, a transplant from Denver, Colorado, has been a driving force in helping the community adapt to a new way of life. He founded Greensburg GreenTown, a nonprofit organization that provides resources and education for sustainable rebuilding.

Greensburg GreenTown also is building a series of "Eco-Homes" -- 12 green houses with energy-efficient features. Wallach wants to turn the Eco-Homes into "living laboratories" to help educate people about energy-efficient construction.

"We want it to be fun and interesting for folks to come see and experience, and again both demystify and de-politicize going green," he said. "And once you experience it, you understand it in a way that simplifies it and in a lot of cases inspires people to want to do it themselves."

The first home is being built and will be ready this summer. It's a silo-shaped building that is expected to be about 70 percent more energy efficient than the average house. The Silo Eco-Home will feature ground-source heating and cooling, solar hot water and even a vegetable garden on its roof.

It also will probably withstand future tornadoes. To demonstrate the strength of the Silo Eco-Home's steel-reinforced concrete, the builder did a little experiment, one that made Wallach very nervous.

The builder used a crane to hoist a junked Ford Escort 60 feet above the home and drop it on the roof.

"And he did that twice," Wallach said. "There was absolutely no damage at all."

No damage to the house, that is. The Ford Escort was destroyed. It bounced off the roof into the yard, where it remained last week.

The town's John Deere dealership also used the opportunity created by the tornado to start over. Its new state-of-the-art facility uses recycled oil to heat and cool its floors, wind turbines to create electrical power and lights that don't require electricity.

"There's a tube that comes down from the roof and it is mirrored inside, so it actually collects the light," said Mike Estes, a fourth-generation owner of the dealership. Estes learned so much about building green that he started a separate wind turbine business.

"We thought our farmer customers could really benefit from this," he said. "If they are saving money on their energy, they have ... disposable income that they can spend anywhere on their farm."

The John Deere dealership will save money as well. It cost Estes a lot more up front to build this way, but he estimated his business will save about $25,000 a year in energy costs.

Daniel Wallach is optimistic these types of savings will continue to attract people looking for sustainable building solutions in Kansas and beyond.

"This town is definitely an example for the rest of the world. We have people from around the world coming out of their way to come to Greensburg," he said. "So it's a great place for people to come and have an emerging experience with what a town of the future looks like and feels like."

All About Alternative Energy Technology • Kansas