(CNN) -- A large ice shelf is "imminently" close to breaking away from part of the Antarctic Peninsula, scientists said Friday. 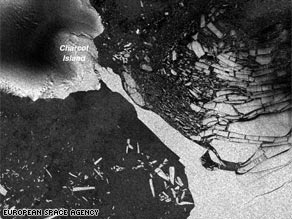 Scientists are investigating whether the ice breakup is caused by global climate change.

Satellite images released by the European Space Agency on Friday show new cracks in the Wilkins Ice Shelf where it connects to Charcot Island, a piece of land considered part of the peninsula.

The cracks are quickly expanding, the ESA said.

Scientists are investigating the causes for the breakups and whether it is linked to global climate change.

The Wilkins Ice Shelf -- a large mass of floating ice -- would still be connected to Latady Island, which is also part of the peninsula, and Alexander Island, which is not, said professor David Vaughan, a glaciologist at the British Antarctic Survey.

That meant the "bridge" of ice connecting Wilkins to the islands was just 984 yards wide at its narrowest location, the ESA said.

Further rifts developed in October and November, said Angelika Humbert of the Institute of Geophysics at Germany's Muenster University.

"During the last year the ice shelf has lost about 1800 square kilometers (694 square miles), or about 14 percent of its size," Humbert said.

Antarctica's ice sheet was formed over thousands of years by accumulated and compacted snow. Along the coast, the ice gradually floats on the sea, forming massive ledges known as ice shelves, the ESA says.

Several of these ice shelves, including seven in the past 20 years, have retreated and disintegrated.

The Wilkins Ice Shelf had been stable for most of the past century before it began retreating in the 1990s.

"It had been there almost unchanged since the first expeditions which mapped it back in the 1930s, so it had a very long period of real stability, and it's only in the last decade that it's started to retreat," Vaughan said.

Wilkins is the size of the state of Connecticut, or about half the area of Scotland. It is the largest ice shelf on the Antarctic Peninsula yet to be threatened.

If the ice shelf breaks away from the peninsula, it will not cause a rise in sea level because it is already floating, scientists say. Some plants and animals may have to adapt to the collapse.

The Antarctic Peninsula is the piece of the continent that stretches toward South America.

All About Antarctica • Global Climate Change