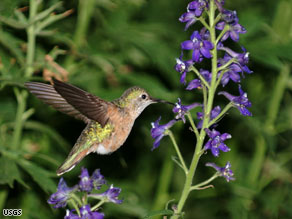 "Citizen scientists" jot notes about birds, like this broad-tailed hummingbird, to add to a national database.

His hand-scribbled notes, along with those of 3,000 other "citizen scientists," can be found lining the drawers of green filing cabinets in the basement of a U.S. Geological Survey building in Laurel, Maryland.

These note cards -- 6 million of them, spanning almost a century -- contain a trove of invaluable information that could help unravel the effects of climate change on bird behavior.

"This is the longest and most comprehensive legacy data set on bird migration that we know to exist," said Jessica Zelt, who coordinates the North American Bird Phenology Program at the USGS Patuxent Wildlife Research Center.

The cards include personal observations made by the birders. Their personal information, along with recorded bird data about the abundance, arrival, departure and location of certain species, is all found in these historic records.

Some of the 2-by-5-inch cards date back to the 1880s, when educator Wells W. Cooke founded the North American Bird Phenology Program (BPP), which encouraged amateur ornithologists to record bird sightings around the United States and Canada.

Now, for the first time ever, the paper files are being scanned, transcribed and converted into a digital database for online access.

"These cards, once transcribed, will provide over 90 years of data -- an unprecedented amount of information describing bird distributions, migration time and migration pathways, and how they are changing," Zelt said.

The collection contains data on about 900 bird species, some of which -- the Guadalupe storm-petrel, Labrador duck, Guadalupe caracara, great auk, Carolina parakeet and passenger pigeon -- have gone extinct.

Maintaining these records since the BPP program ended in 1970 has not been easy.

"The cards have been filed and put away and held everywhere from attics to basements to storage facilities," Zelt said. "A lot of times, they were almost thrown out."

They survived almost four decades after the program ended, thanks to the perseverance of the program's last coordinator, Chan Robbins, a retired wildlife biologist.

"Each time they would get moved and bumped around, boy, I could remember wrapping those things and wrapping string around each little batch so they would not get unsorted," Robbins said.

The BPP program, which is operating on a minimal budget, now has more than 800 online volunteers, ranging from ornithologists to amateur bird watchers to ordinary citizens looking to translate a piece of science history. They have already scanned 200,000 cards and transcribed more than 17,000.

"Anyone can do it. There is a 15-minute training video you can watch after you sign up for the program online," Zelt said. "You don't have to have a background in ornithology, you just have to have an interest."

Bird enthusiast and star volunteer Stella Walsh, a 62-year-old retiree, pecks away at her keyboard for about four hours each day. She has already transcribed more than 2,000 entries from her apartment in Yarmouth, Maine.

"It's a lot more fun fondling feathers, but, the whole point is to learn about the data and be able to do something with it that is going to have an impact," Walsh said.

Climate change already has affected bird populations. Birds use temperature as a cue for many life-cycle decisions. They are also at the mercy of weather patterns that can affect biological processes such as when and where they migrate, and when they breed.

"Warmer temperatures will lead to earlier springs, and local plants and insects will come out earlier. However, if bird arrival dates remain the same, then they are potentially at a disadvantage, as the primary food [insects] for their young may no longer be at its peak," said Sam Droege, an ornithologist at the USGS Patuxent Wildlife Research Center.

A recent survey, "The U.S. State of Birds," conducted by government agencies, conservation organizations and citizen volunteers, found that nearly a third of the nation's 800 bird species are endangered, threatened or in serious decline.

"You cannot return to the past and collect data on the status of plants and animals," Droege said. "So this data set represents one of the few windows the world has into how a group of animals react to climate change."

Because of the work of thousands of people like J.A. Loring, today's volunteers and scientists can view pieces of ornithological history and identify long-term trends while working toward solutions that could help ensure the birds' survival.

"A single bird seen on a large open flat about half a mile west of town," Loring scribbled on June 5, 1897, upon seeing a northern spotted owl in Donner Summit, California.

"It was very tame and flew from roadside to fence post where it watched me for some time," he wrote.

All About Birds • Global Climate Change