Anchorage, Alaska (CNN) -- It's 3 degrees and snowing outside the Alaska Volcano Observatory in Anchorage, but inside the operations center, things are heating up. 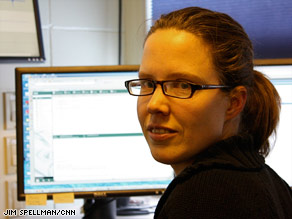 "This is kind of the nerve center, if you will," says geologist Michelle Coombs, who is at the helm of a bank of video monitors showing readouts from sensors on Mount Redoubt, a volcano about 100 miles southwest of Anchorage.

The sensors measure seismic activity on the volcano's summit. Scientists at the observatory combine that information with data gathered from daily airplane flights to the volcano to measure gases and try to figure out if and when Redoubt is going to blow.

"We're seeing lots of little earthquakes right now," says Coombs. "As that magma rises, it breaks rock as it gets to the surface, and it also it gives off gases, and that leads to the seismic activities were seeing now."

When the magma, or molten rock, makes it to the surface, the volcano will erupt.

A siren goes off, and one of the video monitors goes haywire. Is the mountain erupting?

"That's just a little alarm. There was just a little bit of increased seismic activity," Coombs says reassuringly. "It's a special kind of earthquake particular to volcanoes called a long-period earthquake. It has more to do with fluid and gases than with breaking rock."

Since the monitors first showed increased activity on January 23, the observatory has been staffed 24 hours a day. Scientists here are calling in reinforcements; several geologists from the Lower 48 have been making their way north to help.

Coombs thinks Redoubt will erupt within days or weeks. No one lives near the mountain, which sits on the Cook Inlet and is largely surrounded by glacier ice. That means there is no direct danger from lava flows, but huge clouds of ash could spread throughout Alaska.

When Redoubt last erupted in 1989, it spread ash across Alaska for five months.

"Geologists like to use the past as a key to the future, and previous historical eruptions of Redoubt have produced ash clouds of up to 40,000 feet above sea level," says Coombs. She notes that at current weather conditions, "it would take about three hours for that ash to leave the volcano and arrive in Anchorage."

The ash is composed largely of silica, which is similar to tiny fragments of glass. Down on the ground, the ash can be dangerous to breath in and can damage cars as their engines draw the ash into their engines. But it is usually a nuisance.

However, in the sky, the ash clouds can create very dangerous flying conditions for jets.

"For jet aviation, it's a very severe hazard because jet engines run at a very high temperature. And once that silica-rich ash gets ingested into the engine, it can remelt and coat the insides of the engines and freeze up those engines," says Coombs. "That's really the major thing we are trying to avoid here."

The day after the 1989 eruption of Redoubt, a 747 flew into an ash cloud near Anchorage and all four engines stalled. The pilot was able to get two of the engines restarted, and the plane landed safely. Coombs says airspace around the volcano and Anchorage may be closed if Redoubt erupts.

When the alarms aren't blaring, Coombs sends out the official Twitter feeds from the observatory and tries to stay warm. She is eight months' pregnant.

"People have been joking, 'Are you going to name him redoubt?' " she says with a laugh, then shakes her head and gets back to her monitors.

All About Geology • Alaska • Anchorage