Study: Want more milk from cow? Get to know her

(CNN) -- Here's a tip for dairy farmers: If you want your cows to produce more milk, get to know them better. 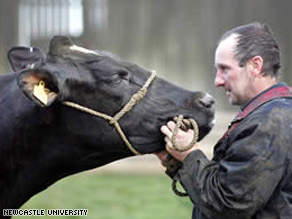 So says a study out of Newcastle University in northeast England, published online Wednesday in the academic journal Anthrozoos.

The researchers found that farmers who named their cows Betsy or Gertrude or Daisy improved their overall milk yield by almost 500 pints (284 liters) annually.

"Just as people respond better to the personal touch, cows also feel happier and more relaxed if they are given a bit more one-to-one attention," Catherine Douglas of the university's School of Agriculture, Food and Rural Development said in a news release.

"By placing more importance on the individual, such as calling a cow by her name or interacting with the animal more as it grows up, we can not only improve the animal's welfare and her perception of humans, but also increase milk production."

Douglas and her colleagues questioned 516 dairy farmers in the United Kingdom. Almost half said they called the cows on their farms by name and reported a higher milk yield.

A press statement from the university, touting the study, quoted Dennis Gibb, who co-owns a dairy farm outside of Newcastle, called Eachwick Red House Farm.

All About United Kingdom