(CNET) -- Microsoft confirmed on Monday that it is planning to release Windows 7 this year, in time for the holiday shopping season. 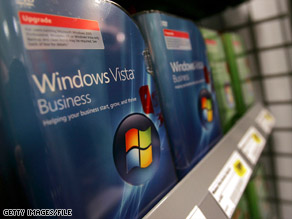 "We are tracking well to a Windows 7 holiday," Microsoft Senior Vice President Bill Veghte said in an interview.

Veghte made a similar statement in a speech Monday at Microsoft's TechEd event in Los Angeles, California. As recently as January, Veghte was saying publicly that such a release was not a sure thing.

At the event, Microsoft also announced it plans to wrap up work on an update to its server operating system -- Windows Server 2008 R2 -- at the same time it finishes Windows 7 on the desktop side.

Microsoft issued a release candidate for the server operating system last month, alongside the near-final version of Windows 7.

For months now, Microsoft's official position has been that Windows 7 would ship by January 2010 -- the three-year anniversary of Windows Vista's mainstream launch. However the software maker has been aiming and planning for a 2009 release all along, as we noted last fall.

Computer makers have been indicating privately -- and in a few cases publicly -- that things have remained on track. But, with memories of Vista's delays fresh in its mind, Microsoft continued to hedge its bets.

Early feedback from the Windows 7 release candidate, which came out late last month, convinced Microsoft it could commit to a 2009 launch, Veghte said.

Veghte said Microsoft has seen the needed step-function drop in the number of crashes being experienced with the release candidate as opposed to the beta version.

Equally important, Veghte said the company has seen the needed level of partner support. He noted that the first couple of companies have gotten Windows 7 logo certification.

Among that first group are some graphics chip vendors -- a big change from Vista in which limited graphics support was among the many compatibility headaches experienced by early adopters.

Veghte did not provide a specific time for launch or when the code would be finalized. However, he said that typically the ecosystem needs anywhere from nine to 14 weeks from the product being declared final to be ready for launch.

At TechEd, Veghte also plans to show a demo of how Office 2010 will take advantage of some of Windows 7's features. For example, Office will make use of a feature called "Jump Lists," which allow users to quickly take action directly from the taskbar at the bottom of the screen. From Outlook's Jump List, for example, users will be able to start a new message, create a contact, or schedule a meeting with two clicks.

Those that have both products will also be able to drag an Office file from a Jump List directly into an e-mail, a big time-saver.

A technical preview of Office 2010 will kick off in July, with those at TechEd among the first to get to try out the software.