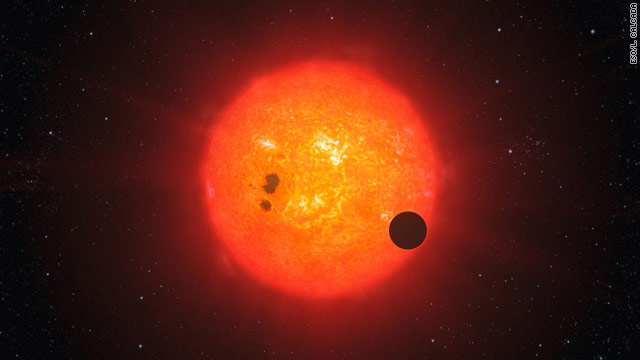 This illustration shows how the newly discovered planet may look orbiting its nearby star, which is smaller than Earth's sun.
STORY HIGHLIGHTS
RELATED TOPICS

(CNN) -- Astronomers announced this week they found a water-rich and relatively nearby planet that's similar in size to Earth.

While the planet probably has too thick of an atmosphere and is too hot to support life similar to that found on Earth, the discovery is being heralded as a major breakthrough in humanity's search for life on other planets.

"The big excitement is that we have found a watery world orbiting a very nearby and very small star," said David Charbonneau, a Harvard professor of astronomy and lead author of an article on the discovery, which appeared this week in the journal Nature.

The planet, named GJ 1214b, is 2.7 times as large as Earth and orbits a star much smaller and less luminous than our sun. That's significant, Charbonneau said, because for many years, astronomers assumed that planets only would be found orbiting stars that are similar in size to the sun.

Because of that assumption, researchers didn't spend much time looking for planets circling small stars, he said. The discovery of this "watery world" helps debunk the notion that Earth-like planets could form only in conditions similar to those in our solar system.

"Nature is just far more inventive in making planets than we were imagining," he said.

In a way, the newly discovered planet was sitting right in front of astronomers' faces, just waiting for them to look. Instead of using high-powered telescopes attached to satellites, they spotted the planet using an amateur-sized, 16-inch telescope on the ground.

There were no technological reasons the discovery couldn't have happened long ago, Charbonneau said.

The planet is also rather near to our solar system -- only about 40 light-years away.

Planet GJ 1214b is classified as a "super-Earth" because it is between one and 10 times as large as Earth. Scientists have known about the existence of super-Earths for only a couple of years. Most planets discovered by astronomers have been gassy giants that are much more similar to Jupiter than to Earth.

Charbonneau said it's unlikely that any life on the newly discovered planet would be similar to life on Earth, but he didn't discount the idea entirely.

"This planet probably does have liquid water," he said.