Pet products get the tech treatment 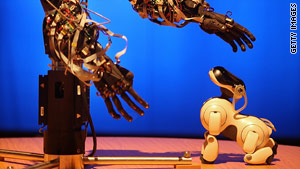 (CNN) -- Gadgets are not soft and cuddly, and there are no downloadable upgrades for slobbering mutts. But with enthusiasm for pets growing unabated, and technology digging ever deeper into our lives, the two seemingly unrelated worlds increasingly touch.

In the U.S., total spending on pet products topped $43 billion last year, with no declines in any category from the previous year, according to the American Pet Products Association. It projects the figure will be about $45.4 billion for this year (that's bigger than the GDP of Kenya.)

Spending on pet-care products has gone up 34 percent globally over the past five years, according to research firm Euromonitor International, but there's little if any serious research on tech-related pet spending.

Still, many ways in which technology has changed pet ownership are readily observable. Increasingly social networking tools like Twitter and blogs are used to share ideas and information about pets, notes Veronica Boutelle, founder of Dogtec, a U.S.-based consultancy for dog businesses.

But where technology excels is in addressing the two big worries of pet ownership: fear and guilt. Most owners dread the day their pet gets lost. Enter GPS pet tracking, offered by companies like Zoombak, Garmin, and Positioning Animals Worldwide.

This summer the latter launched the SpotLight GPS pet locater, which fits on a collar. If you lose your pet, you can not only check Google Maps to see where it is, but get turn-by-turn updated directions on your phone. You can also get email alerts whenever your pet strays outside a safety zone that you designate.

"Sales have increased dramatically month to month," says Megan Lavery, a spokesperson for Positioning Animals Worldwide, adding that iPhone and BlackBerry apps are on the way.

Meanwhile the Micro I.D. Rescue Collar contains a tiny USB flash drive that somebody who's found a lost pet can plug into a computer to find care instructions and the owner's contact details.

But for many pet owners, fear is outweighed by guilt about not giving pets enough company and attention.

The Talk to Me Treatball has them in mind. Released this year, it records and plays voice messages from the owner and dispenses treats at random when it's rolled around, so a pet presumably feels reassured when alone.

An iPhone app called Pet Acoustics, from a company of the same name, plays soothing music customized to the hearing sensitivities of dogs, cats, or horses. Online reviewers describe leaving the music on at homes when pets are alone there, or using it during car trip to soothe canine nerves. Released in October, the app has been downloaded in more than a dozen countries.

Ignoring a pet when you're home can induce more guilt than leaving it alone.

That's why the FroliCat Bolt has been created. By automatically sending a laser dot skittering randomly across any surface, it is supposed to prompt paw-thumping pursuits and keep pets entertained when owners are otherwise occupied. Released this year by Chicago-based Brilliant Pet, it can be used manually, too, as with handheld laser pointers.

Another aspect of owning pets is wishing you could know what they think, or what they do when you're gone. Addressing the former desire is the Bowlingual Voice communicator.

With this, a handheld unit wirelessly linked to a microphone on the dog's collar translates each bark into one of six canine emotions, which it reads aloud. Not everyone agrees it works as advertised, but Japanese toy maker Takara Tomy claims there is solid science behind it.

Many owners want to see what their pets get up to when they're gone, so webcams come to mind. Nobody, however, wants to pore over hours of footage or stare at a live feed in hope of catching that rare moment when something happens. Cameras that attach to a collar add nausea-inducing bouncing to the equation.

HighlightCam, launched this year, condenses video down to the highlights, like when Rover opens the fridge for the turkey leftovers. Users can get email alerts and then go online to see what just happened.

Catching Rover in the act is fun, but "it's also sometimes recommended by dog trainers for diagnosing things such as separation anxiety," points out Boutelle at Dogtec.

For owners who want to know what their dog is made of, pet DNA testing kits are now readily available. Kits can be ordered online (or bought in a store) for about $60. Owners use cotton swabs to gather inner-cheek cells and mail them off to a lab, such as BioPet Vet Lab in Tennessee. A few weeks later a certificate describing their pet's breed mix arrives in the mail.

Cuddling up to gadgets

Not every pet is flesh and blood, though. Artificial human companions, whether robots or virtual pets, are on the rise.

Robots are catching on especially in nursing homes, partly because they're cleaner and more predictable than live animals.

The Paro, which looks like a baby harp seal and has synthetic hypoallergenic fur, is. Designed to elevate moods the way a real pet does, it's been on sale in Japan for about four years.

Over 1,300 units have been sold there, with 70 percent going to individuals and 20 percent to nursing homes and schools. The first U.S. shipments of the $6,000 companion began this month.

Nursing homes that had been testing it out are among the early orders, according to Christine Hsu, general manager of Paro Robots U.S. With coos, squirms, and eyelash-batting, the Paro can respond with soft subtlety to things like being stroked, hugged, and hearing its name.

The upshot? Cuddling with gadgets isn't far-fetched. And slobbering mutts can have a high-tech pedigree.