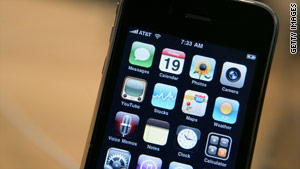 (CNET) -- Would you like to let AT&T know when your iPhone has dropped a call? Well, now there is an app for that.

The application is free and available in the iTunes App Store. It uses GPS technology in the iPhone 3G and the iPhone 3GS to pin point where the user is when experiencing the problems. For first generation iPhones, it uses cell tower-triangulation to get a fix on problem areas.

Once the application is launched, users have several complaint options. They will see a screen that has buttons that let them report a dropped call, poor voice quality, or poor service coverage.

"We think this is a great way to get customer feedback to improve our network," Siegel said.

"We are always looking for ways to make it easy for customers to share their experiences. And this app lets customers report issues. It logs the time and location and automatically forwards the information to our network planning team."

iPhone owners have been complaining about AT&T's network since the Apple iPhone went on sale in the summer of 2007. Complaints mounted after the 3G version of the phone was released a year later in 2008.

And as more iPhone users come onto the network, more people, particularly in densely populated urban areas, such as New York City and San Francisco, have experienced problems with dropped calls and congested data networks.

AT&T executives have not said that AT&T has a problem with its network. But executives, such as AT&T Chief Technology Officer John Donovan, have said that the company has seen a surge in data traffic attributed to iPhone users, who typically consume more wireless bandwidth than other AT&T wireless customers.

AT&T has been upgrading its network to keep up with demand. But problems persist. And AT&T's network recently got a poor ranking in terms of customer satisfaction in a Consumer Reports survey.

Verizon Wireless, AT&T's chief rival, has taken advantage of AT&T's struggles with a series of advertisements that point out AT&T's lack of 3G network coverage in certain parts of the country. Verizon is running advertisements that mock the Apple "There's an app for that," catch phrase with one that says, "There's a map for that."

AT&T fired back with a lawsuit and an advertisements of its own featuring actor Luke Wilson, who points out AT&T's strengths while taking a few shots at Verizon Wireless.

Siegel said that the new "Mark the Spot" application was not prompted by the bad publicity around its network issues nor was it prompted by the current ad wars going on between AT&T and Verizon.

Instead, he said that the application was simply a part of AT&T's ongoing commitment to listening to customers.

"We are always looking at ways to get customer feedback in as timely a manner as possible," he said. "That's why we pay attention to Twitter, Facebook and blog. One of the great values of these social networking tools is that it's a great way to get instant feedback. And it helps us identify problems."

The "Mark the Spot" application can be downloaded onto all iPhones running version 3.0 or later of Apple's operating system or it can be access using iTunes and synchronized to the iPhone via a PC or Mac.

Siegel said that AT&T is testing the "Mark the Spot" app for other devices. And he said AT&T hopes to offer applications on other smartphones in the future. No date has been announced yet. And Siegel didn't specify which devices might get the new application, but considering that AT&T sells a lot of Research in Motion's BlackBerry devices, it's likely it will create an application for that device.

The app could be offered through AT&T's own application storefront or through RIM's BlackBerry App World.