'Pulp Fiction' Oscar winner appears to be tweeting from jail 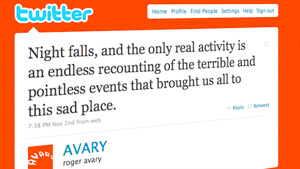 (CNN) -- An inmate wrestles with his fear, boredom and remorse.

He is subjected to random strip-searches as a fellow inmate espouses conspiracy theories about the jailhouse food and another is busted with a hidden ball of black-tar heroin.

The alternately bleak, wry and amusing scenes, described in a series of journal-like entries, would fit comfortably in the work of Academy Award-winning screenwriter and director Roger Avary.

But they may be based on fact, not fiction. These 140-character snippets have been popping up for more than a month on what friends acknowledge as the Twitter account of Avary, who is serving a year in a California jail for vehicular manslaughter.

In fact, the tweets may have landed Avary in tighter security.

Avary, 44, whose Oscar came in 1995 for co-writing "Pulp Fiction" with Quentin Tarantino, appears to have begun the posts September 26, around the time he began serving his sentence at Ventura County Jail northwest of Los Angeles.

Avary's Twitter feed had been dormant since July 23, when he wrapped up a series of tweets describing what appeared to be scenes from a prospective screenplay.

After a two-month hiatus, the September 26 post contained only two words: "FADE IN," the traditional beginning of a professional screenplay.

"Nightly, every few hours like clockwork, a guard's flashlight beam strikes #34's face, perhaps to ensure lack of proper rest and exhaustion," reads a post from November 20. Many tweets describe Avary as "#34," an apparent reference to his inmate number.

Other posts describe an array of life-in-jail moments, from the bittersweet release of a friendly cellmate to an accidental fire in a coffee can used for cigarette butts that brings a harsh response from riot squads.

"Night falls, and the only real activity is an endless recounting of the terrible and pointless events that brought us all to this sad place," was the November 2 post.

CNN has not been able to independently confirm that Avary has been writing the posts. But the account is linked on Avary's personal Web site, and friends of his have said it is authentic.

"My friend @AVARY is tweeting from the inside," writer Neil Gaiman, who worked with Avary on the 2007 movie "Beowulf," wrote on his own Twitter feed last week. "It's riveting, horrible strange. Jail in 140 character lumps."

Gaiman, whose books include "Coraline," "Neverwhere" and "American Gods," bristled when some of his followers suggested that the posts on Avary's feed were fiction.

"So he's actually in a nice prison with cake and sushi and is tweeting about having a rough time to make us feel sorry for him?" he wrote to one.

Ross Bonfiglio, a spokesman for the Ventura County Sheriff's Department, said Avary was part of a furlough program that allowed him to leave jail to work a job during weekdays while spending nights and weekends behind bars.

"That will explain why he can 'tweet,' " Bonfiglio said.

But Wednesday night, Avary was sent from the work-release program back into regular confinement at the jail, Bonfiglio said. "The only reason I can give you is for security reasons," he said.

By the middle of last week, Avary's Twitter account had begun gaining popularity on the social networking site, with several blogs mentioning it. As of Friday, Avary had more than 13,000 followers.

"#34 is 'rolled up' to a higher security facility for exercising his first amendment rights. The truth he has discovered is too dangerous," was posted on Avary's account early Friday. By Monday morning, that post appeared to have been deleted.

#34 is "rolled up" to a higher security facility for exercising his first amendment rights. The truth he has discovered is too dangerous
--Twitter feed of writer Roger Avary

Terry Thornton, a spokeswoman for the California Department of Corrections, told CNN that state inmates are not allowed access to the Internet while in custody.

But Bonfiglio said it would not violate jail rules for an inmate to relay Twitter messages to someone over the phone or in a letter.

Born in Manitoba, Canada, and raised in Arizona, Avary directed the 1993 film "Killing Zoe" and the 2002 adaptation of the Bret Easton Ellis novel, "The Rules of Attraction."

But his greatest accolade was as a writer, taking the Oscar along with Tarantino for Best Original Screenplay. The two had met in the 1980s when they worked at a video store and collaborated several times in the early '90s before parting ways.

Avary pleaded guilty in August to gross vehicular manslaughter while intoxicated, according to the California corrections department.

Authorities said Avary was driving more than 100 mph when his car hit a telephone pole on January 13, 2008, in Ojai. Passenger Andreas Zini, 34 -- an Italian who, according to media reports, was visiting with his wife during their honeymoon -- was killed, and Avary's wife, Gretchen, was ejected from the car and injured.

Bonfiglio said he could not contact Avary to ask if he would be willing to do an interview for this story.

CNN tried to contact the writer of @AVARY through his Twitter feed but received no response. Attempts to reach Avary through his agent were unsuccessful.