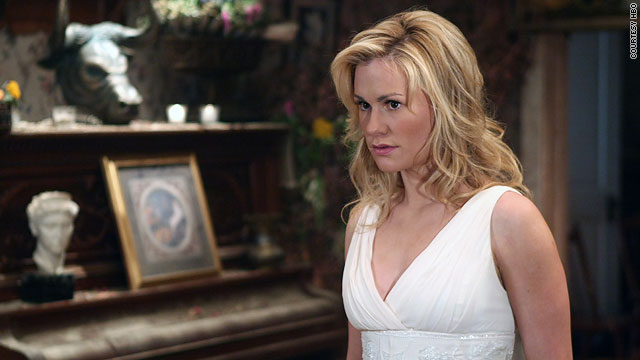 (CNN) -- Among a certain (mostly young, mostly female) segment of the population, this weekend's news is all about one thing and one thing only: the opening of "The Twilight Saga: New Moon."

Of course, for every Edward Cullen lover who lined up outside movie theaters days in advance, there's a vampire fan who'd love to see "True Blood's" Eric, Lestat from "Interview with the Vampire" or even old Dracula himself take a bite out of "Twilight's" teen-vamp heartthrobs.

Whichever vamp camp you find yourself in, you'll find fellow fans of the fang on Twitter. Here are five:

Sure, you can follow the official @Twilight feed or any of the several fan club accounts. But we like this one. Nation is a 20-year-old college student, writer and blogger who decided to tackle the "Twilight" phenomenon from the perspective of a guy who didn't get the books or movies but was curious to figure out what all the fuss was about.

"I do not read vampire romances, nor werewolf romances, goblin romances or hobbit romances," he writes on his Web site, Twilight Guy. "But the Twilight books are obviously different, because they have single-handedly started a revolution in today's literature."'

His site earned a positive review from "Twilight" author Stephenie Meyer and scored him an interview with her and press credentials to cover the "New Moon" premiere.

Sample tweet: I'm not actually at the New Moon premiere line anymore, I'm back home. Those people have camped in the cold since Thursday. DEDICATION!

With all this talk about Edward and Jacob, let's not forget Lestat and Louis. Rice, whose most recent book, "Angel Time," was just released, has recently been prone to flurries of postings originating from her Facebook status updates.

On her feed, Rice discusses her work with fans while posting personal observations on religion, politics and life in general. (Note: Rice's feed is not tagged by Twitter as a "Verified Account," but the posts match up with updates from her Facebook page, which is linked to her official Web site).

Poppy Z. Brite and Laurell K. Hamilton are among other vampire-themed authors who tweet.

Sample tweet: Email responses to my novel, Angel Time, are still coming in, giving me much pleasure and some food for thought.

As part of its viral marketing campaign, HBO's "True Blood" has a whole coven of its characters on Twitter, tweeting away as if they're real people. (Well, at least as real as people you only know on the Internet).

From Viking vamp Eric to sassy Merlotte's Bar cook Lafayette, they're all there. One of the most active is this one, from the perspective of the main character from Charlaine Harris' Sookie Stackhouse novels, on which "True Blood" is based.

Sample tweet: Pullin' into the @MerlottesBar parkin' lot and it's already lookin' pretty full for a Wednesday. Tweet y'all once I get settled in.

With tons of followers, this is where fans of both the L.J. Smith books and the teen-friendly series on the CW talk it out. It also carries on the proud tradition of bad vampire puns with the quote in the feed's biography section: "It would really suck if you didn't follow The Vampire Diaries."

Sample tweet: Jenna's got some creepy, but hot, guys after her. Think she can trust any of them? http://bit.ly/19u1md

Woerner is the author of "Vampire Taxonomy," a new book that amusingly addresses how to best relate to the vampires in your life.

Sample tweet: Is it weird that all the shirtlessness in New Moon makes ME want to hit the gym?