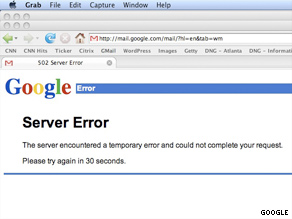 Many Gmail users encountered this error message when trying to access their e-mail Tuesday.

"We know how many people rely on Gmail for personal and professional communications, and we take it very seriously when there's a problem with the service," wrote Ben Treynor, a Google vice president of engineering, Tuesday in a 9:59 p.m. ET post on the Gmail blog.

"Thus, right up front, I'd like to apologize to all of you -- today's outage was a Big Deal, and we're treating it as such," Treynor wrote.

Gmail, Google's popular free e-mail service, was inaccessible to many of its tens of millions of users for about 100 minutes Tuesday afternoon, prompting widespread chatter on Twitter and other social networks.

Gmail's problems were a top trending topic on Twitter, with users trading updates and posting links to blogs such as Mashable, which published a post called, "5 Things to Do While Gmail is Down." (No. 1: "Immediately flood Twitter with tweets alternately proclaiming 'Gmail is down!' and inquiring 'Is Gmail down?' ")

"When something like this used to happen, you would wonder if it was just you," Rachel Sklar, editor-at-large of Mediaite.com, told CNN. "Here, it was immediate that you knew what was going on because of Twitter, and you knew that everyone had the same problems."

People couldn't access Gmail via the Web interface Tuesday because their requests couldn't be routed to a Gmail server, Treynor explained. He said Google's engineers are compiling a list of things they intend to fix or improve as a result of their investigation into the outage.

"We've turned our full attention to helping ensure this kind of event doesn't happen again. Some of the actions are straightforward and are already done -- for example, increasing request router capacity well beyond peak demand to provide headroom," he wrote.

Gmail had 36.9 million U.S. users in June, according to ComScore, a company that measures Internet use. Gmail remains the third-most popular Web-based e-mail service, after Yahoo! Mail and Microsoft's Hotmail.