Shooting the boss (and getting paid for it)

(CNET) -- To thank him for letting them spend the last two hours of their workweek playing video games on the company dime, Kevin Grinnell's employees often single him out and shoot him in the head. 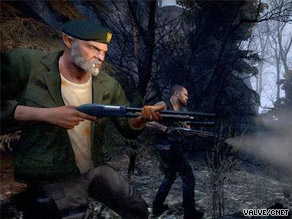 One company encourages employees and management to join forces to play "Left 4 Dead" together.

To be fair, the employees at Grinnell Computers aren't firing real weapons at their boss but are instead releasing the stresses of their week in a multiplayer online game known as Combat Arms.

Most Fridays for the last couple of months, the six employees of the Beaumont, Texas-based company have been encouraged to spend from 3 p.m. until 5 p.m. blasting away at the online first-person shooter from Nexon as a team-building exercise.

It's about "bonding," Grinnell said, when asked what the benefit to his company is of paying his team to play games. "We laugh until we cry when we play these games. We can do the thing where we have company dinners, and company functions, but those really aren't stress relief. At times, they can be more stress than they're worth."

Added employee Lee Mims, "You don't get to shoot your boss very much. It's kind of nice when you get a head shot on your boss."

Fans of the hit NBC show "The Office" may well remember an episode from season three called "The coup." In that episode, one of the main characters, Jim Halpert, had recently joined a different office of the paper supplies company he works for, only to fall haplessly into the branch's regular team-building sessions of the war game Call of Duty.

The scene may have been cooked up for its comedic effect, but it's no fiction that companies are turning more and more to video games as a way of building bridges between employees, or even between employees and management. And while there may be hierarchies to follow during the workday, it seems like chains of command often go out the window once co-workers get their game on.

That's a sentiment very familiar to Ross O'Dwyer, who runs the professional services group at the games middleware company, Havok, where for the last seven months or so, employees and management alike are engaging in regular evening games of the cooperative first-person shooter game Left 4 Dead.

O'Dwyer said that after an employee started espousing the virtues of Left 4 Dead, several people in his office began playing the game using a single account that was "floating around."

Soon, though, as many as 12 employees had their own fully licensed copies of the game and now, many evenings are spent in the office with the team deep into Left 4 Dead sessions. And despite his status as their boss, during those sessions, O'Dwyer has found none of the respect he gets during the work day. Nor does he expect it.

"There's absolutely no lines of authority there," he said. "If I'm crap, if I'm the worst player on the team, that's the way it is. I will bow down to the...IT guy, who may be the best Left 4 Dead player on the team. We'll all fall in line, and I think that's great."

To O'Dwyer, the benefits of gathering his team for evenings of video gaming are clear: it's a great way of building cohesion.

"The CEO was in and he thought it was great to see so many people playing games," O'Dwyer said, "and actually spending more time together, and letting the barriers down a little bit."

Of course, while the folks at Havok are getting their game on in the evenings, at Grinnell Computers, it's a Friday afternoon thing.

Company owner Grinnell said that he offers his employees a choice: spend the last two hours of each Friday--when things are slow at his network installation and repair firm and the phones aren't ringing--playing Combat Arms on the clock, or take those same two hours off, unpaid.

And while he said he doesn't twist anyone's arm to play, there's no doubt that employees are going to want to get paid for their time.

Eating their own dog food

As one might expect, examples of companies in the video game business encouraging employees to play games together are easy to find. But while it may be a relatively new dynamic for colleagues to play multiplayer games as team building, there's long been a tradition of game playing in the office, said Min Kim, the vice president of marketing at Combat Arms publisher Nexon.

"People have been playing games in the office for years, with (single-player) Flash games and fantasy football," Kim said. "Games like Combat Arms are very social in that people are playing together--(which) builds team morale."

And Kim added that he thinks of multiplayer video games like Combat Arms as akin to playing basketball or golf, or even going out for a drink, as a way for colleagues to learn more about each other. But Combat Arms, for one, costs nothing, he pointed out, so properly managed, it is nothing but a net positive for companies.

To Kim Pallister, the director of content planning at Intel's visual computing group, it's a matter of getting more employees to take part in the very genre that pays the group's bills.

"We do quarterly gaming nights where we'll...get over a hundred people participating," Pallister said. "We'll set up...high-end PC gaming rigs for multiplayer, and we'll have consoles set up for things like Wii Sports, Rock Band, Dance Dance Revolution, etc. It's not only good for team-building, it gives everyone a chance to 'eat our own dog food' and see how games play on our hardware."

At the giant video game publisher Electronic Arts, a similar scene played out as a way of getting an in-development game closer to completion.

According to Robin Hunicke, then a senior member of the team making EA's Boom Blox, "The Boom Blox and Boom Blox Bash Party teams did round-robin tournaments with their QA teams during development to encourage playing the game."

Hunicke said that one purpose was to look for bugs in the games specific to multiplayer sessions, but another was to "improve cross-team communication."

In a recent advice column in The New York Times, Eilene Zimmerman addressed the question of whether it's a good idea for co-workers to drink alcohol if everyone else, including their boss, is imbibing.

Zimmerman's conclusion: Be very wary of mixing work and alcohol, even after-hours.

To O'Dwyer, playing video games with colleagues after work is a much better--and quicker--way to go, particularly because of the bonding that comes with trying to go after a common enemy the way he and his employees do in Left 4 Dead.

"You don't have to spend hours, and you don't need alcohol," O'Dwyer said. "You don't need to be half-twisted (drunk) before people let their guards down."

And that's important in an environment where every time the phone rings, it means trouble is calling.

"It's great stress relief," said Grinnell of Grinnell Computers. "Our business is incredibly stressful. People don't call us unless something bad has happened."

But Grinnell added that his company's Friday afternoon Combat Arms games have grown to include both the firm's outside lawyer and even one of its clients. And while the company already had a strong relationship with the client, Grinnell said playing the game together has only enhanced the mutual understanding.

"Yeah, we've gotten to know them better," Grinnell joked, "especially when they talk smack and you get to give them a head shot."