(CNN) -- You might think childbirth would be a topic too personal, too beautiful or way too graphic to write about on Twitter. 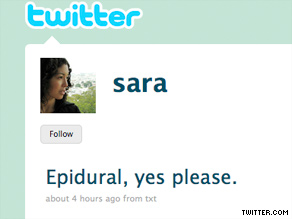 Sara, the wife of Twitter's CEO, posted online from a hospital while she was in labor.

But, as Sara Williams showed on Tuesday when she posted Twitter updates about giving birth to her child, online social networking has pushed its way into the delivery room.

It's now a trend for expectant moms to post to sites such as Twitter from the time they conceive to the moment they deliver a baby into the world.

Williams, wife of Twitter CEO Evan Williams, posted to her 14,000-plus Twitter followers when her water broke, when she arrived at the hospital, during contractions and when she decided to get an epidural. Her husband broke the news on his Twitter feed that their "perfect baby boy" was delivered on Tuesday afternoon.

As if the real-time drama of her labor wasn't enough, Sara Williams managed to spice up her Twitter feed with humor along the way.

"Dear Twitter, My water broke. It wasn't like Charlotte in Sex and the City," she wrote at about midnight ET on Tuesday. "Now, timing contractions on an iPhone app." After noting later that contractions are painful, she wrote, "Epidural, yes please."

Her childbirth drew widespread attention online, where people who have never met Williams eagerly awaited the birth of her baby. Some moms and dads cheered her on, saying that by posting through labor she lifted the veil on a period that can be terrifying for pregnant women who don't know what to expect when their baby is ready to leave the womb.

Others cringed at the idea, saying childbirth posts are too much information.

Williams' childbirth is among the first to be publicized though Twitter, but she's far from the only woman to have published thoughts about the birth of her child while the process was happening.

Terra Carmichael, who lives in the San Francisco Bay Area, said she tweeted through her third childbirth in February to keep her loved ones up to date.

"At the moment nothing went through my head. It was just like, 'This is how I'm feeling and so this is going out there, and if you don't like it you don't have to read it,' " said the 36-year-old. "Afterwards, I was like 'I hope I wasn't too gross or graphic.'"

She said posting to Twitter helped relieve some of the pain.

"I would literally be coming down from a really painful contraction and I'd be saying, 'Give me my iPhone,' and [my husband] would be saying, 'You are weird. Why are you doing this,'" she said.

"Some of it was for me. It just felt kinda good to get that out there, put that out to the universe so it wasn't just my pain, so other people could feel it for me and feel it with me a little bit."

Kyle Monson, a new dad in New York City, did the tweeting for his wife. While she was in labor, he was busy sending text messages.

"We were on our iPhone and Blackberry right up until the point when my wife started pushing, and then we had to put those phones down," he said.

Monson posted updates about his wife's labor to Twitter by using code words only his friends could understand. Instead of posting "my wife just gave birth," for instance, he wrote, "Operation Bumblebee complete! Ada Elizabeth is 7lbs, 2oz, and is very happy to be here."

Ada, who is the couple's first child, was born on August 5.

Monson has nearly 800 Twitter followers and didn't want everyone in the world to know about the "blood and gore" of the birthing process.

Most of the couple's friends and family live further West, he said, so the online networks helped them keep their loved ones updated.

The senior editor at PCMag.com said his wife was sending text messages to people throughout her 10-hour labor.

"She had an epidural so it was actually pretty easy for her," he said.

Debora Robertson, group manager of the Expectant Mother's Guide, said she wouldn't feel comfortable sharing so many details on Twitter, but making such information public could be helpful for pregnant women who are anxious about childbirth.

"I think it's great that she [Sara Williams] can do that with family and friends, and I would imagine a lot of first time moms have curiosity," she said. "They're peeking into the delivery rooms."

Monson also said Twitter posts from the delivery room can be informative.

"Going into it I had a lot of questions because no one really writes about this stuff" online, he said.

Many new sites are promoting "mom-to-mom wisdom" as a way for expecting parents to become educated about childbirth, said Dina Freeman, spokeswoman for the Baby Center, an online resource for moms.

Freeman said one of her friends tweeted through childbirth. She had mixed feelings about the posts.

"Although I was happy for the updates, I was like, 'Are you sure you want that on Twitter?'"

Moms are finding other ways to share their pregnancies online, too. A quick search on YouTube found more than 3,600 videos matching "childbirth."

And a product called the Kickbee is a belt that wraps around a pregnant woman's stomach and automatically posts to a Twitter feed when the baby kicks.

Some people say too much technology in the delivery room is a bad thing.

"I think it's terrible," Dr. Renana Brooks, a psychologist, told the Baltimore Sun in reference to people who post on Twitter during childbirth. "One of the few rituals we have, in terms of giving each other undivided attention, is that time in a delivery room. To be spending time writing to someone else destroys the whole ritual.

"That's like Twittering on your wedding night. You can blog about it afterward."

The Twittering parents, however, said they're just trying to include as many friends and family members in their special moment as possible.

"I've got a lot of people in my life that I love," Carmichael said, "and I want to keep up on their lives. This is one of the biggest events of my life, and so [writing on Twitter] was my way of keeping people posted on what was happening."

After his wife gave birth on Tuesday, Evan Williams beamed on his Twitter feed.

"Yay! @ev and @sara just had their first baby and it's a boy -- can't wait to meet the mini CEO," Twitter co-founder Biz Stone wrote.