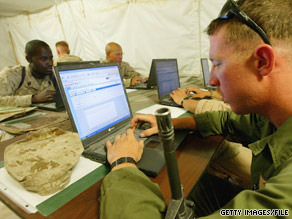 The review follows a Marine Corps ban on accessing such sites on its computers, due to security concerns. The ban announced Monday only applies to Marine Corps networks and computers, allowing Marines to access the sites on their own computers or at Internet cafes.

A policy review for the entire Department of Defense should be complete by the end of September, Pentagon spokesman Bryan Whitman said.

In addition, commanders in Iraq and Afghanistan have Facebook pages to share information about operations, while the Chairman of the Joint Chiefs of Staff, Adm. Mike Mullen, has 4,000 followers on Twitter.

Still, Whitman said, a tension exists "between using these as important tools and addressing the challenges from a security standpoint." The goal of the review is to come up with "a more coherent policy," he said.

The U.S. Strategic Command has warned it was considering a Department-wide ban on Web 2.0 sites such as Facebook. The Marine Corps issued its ban of Twitter, Facebook, MySpace and other social networking sites in response to the Strategic Command warning.

The banning order said: "These Internet sites in general are a proven haven for malicious actors and content -- and are particularly high risk due to information exposure, user-generated content and targeting by adversaries."

Some waivers will be given for "mission critical" reasons, said the ban order, which is scheduled to last a year.