(CNET) -- Google was going to help democratize data in China. Instead, about three years after entering the Middle Kingdom, the search company still finds itself in an uncomfortable working relationship with government censors. 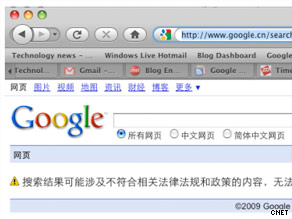 For eight days between June 3 and June 11, Google.cn blocked results for Tianamen Square.

For about eight days between June 3 and June 11, Google.cn blocked all results that might come from searches for Beijing's Tiananmen Square.

Not just politically sensitive results, not just historical accounts of the hundreds of deaths on June 4, 1989, but every single result -- including directions to the square -- with an error message that read "Search results can not be displayed as they may contain contents that do not comply to related laws and policy."

As of Thursday, things had appeared to return to normal. A search for "Tiananmen Square" in either English or Chinese brought up links to shops in the area, historical documents about one of China's most storied places, and images of fun, happy times in downtown Beijing.

So how did Google know that it was supposed to drop the hammer on all results for Tiananmen Square for that brief period of time? And how did it know that it was once again safe to reapply the limited filter?

Google isn't saying, beyond pointing to previous interviews and statements it has given on its tricky balancing act in China. "Google.cn complies with Chinese laws."

The differences in search results over time in China are the result of a variety of factors, including the content that is available on the Internet and the regulations we follow in China," the company said in a statement last week.

But it has confirmed that Google has dropped a previous method of determining how to self-censor its search results -- pinging the so-called Great Firewall of China to see what sites are blocked --i n favor of a new self-censorship method that the company refuses to disclose.

Google's formal entry into China in 2006 with Google.cn forced the company to strike a difficult balance between its stated goal of making the world's information widely available and the requirement that all Internet companies doing business in China adhere to government regulations regarding censorship.

In some ways, Google has improved the flow of information in China. Upon entering the market, it made sure to include a disclaimer like the one above alongside search results for sensitive queries, something even Baidu does now. That decision allowed Chinese Internet searchers to know they weren't getting the full extent of what was available on the Internet for a given query.

In the past, company executives have justified Google's censored presence in China with a glass-three-quarters-full analogy: it's better to offer Chinese Internet users access to a wealth of information they might be otherwise unable to find at the expense of "pulling a few books out of the library," so to speak.

They are also, of course, unwilling to miss out on perhaps the greatest Internet land rush of the 21st century as China's massive population continues to come online.

However, determining which books to leave and which books to pull is not an easy task. Google representatives over the past week pointed repeatedly to an article in "The New York Times" from 2006 that described Google's methodology for making those tough choices.

From the article: Brin's team had one more challenge to confront: how to determine which sites to block? The Chinese government wouldn't give them a list. So Google's engineers hit on a high-tech solution. They set up a computer inside China and programmed it to try to access Web sites outside the country, one after another. If a site was blocked by the firewall, it meant the government regarded it as illicit -- so it became part of Google's blacklist.

That system is no longer in place, Google representatives confirmed. Despite repeated inquiries, no information was made available about the new system: whether it involves taking direct cues from the government, self-selection by Google engineers, or something else.

In a way, Google's reluctance to talk about censorship and China is understandable. The Chinese government's regulations seem to be written in a deliberately vague way as to encourage Internet companies to censor more than the government would actually like to see pulled from the Internet.

In 2006, CNET's Declan McCullagh noted that Google.cn censored far more search results than seemed necessary, which was proven when Google restored access to Web sites like Budweiser.com following the article, with no apparent repercussions from the Chinese government.

The Times article from 2006 also noted the existence of weekly meetings between government officials and Internet companies known as the "wind-blowing" meetings; as in, you don't need a weatherman to know which way the wind blows in China, you need a bureaucrat.

During those meetings, government officials would discuss upcoming events and hint at the ones they'd prefer to go unnoticed, according to the article.

Ahead of the 20th anniversary of the massacre in Tiananmen Square, it seems several such meetings took place. Web sites across China were forced to shut down for a brief period of time in the days surrounding June 4, which many of them sarcastically dubbed "Chinese Internet Maintenance Day."

Unlike Twitter, Google's YouTube, and Wordpress, Google.cn was not shut down during the days surrounding the anniversary. But it was certainly far more stingy with search results than it was before the first week of June, or at present.

Whatever filter Google is using is both flexible and imprecise. Searches for obvious terms like "Tiananmen Square" and "Tank Man" returned no results between approximately June 3 and June 10, but as of last Thursday once again returned generic results unrelated to the events of June 4, 1989.

However, during "Chinese Internet Maintenance Week," searches on Google.cn for "June 4 incident" (the Chinese term for the events of June 4, 1989), "Goddess of Democracy" and "Tiananmen Square massacre," all returned results that one might think would be frowned upon by the Chinese government, including images of the Goddess of Democracy -- a Statue of Liberty-like figure constructed by student protesters -- staring defiantly at a portrait of Chairman Mao above the Tiananmen Gate.