SAN FRANCISCO, California (CNET) -- Google spent Wednesday morning trying to get developers excited about the next generation of Web technologies by showing off how future Web applications will mimic desktop apps. 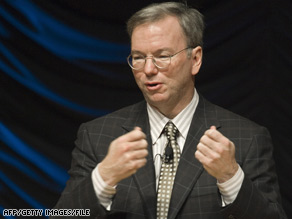 "It's time for us to take advantage of [this]. . .amazing opportunity," Google's Eric Schmidt told developers.

"It's time for us to take advantage of the amazing opportunity that is before us," said Google CEO Eric Schmidt, kicking off Google I/O 2009 in San Francisco. Schmidt was referring to the growing sense that the Internet and browsers--rather than a computer's operating system--will be the future foundation for application development.

The industry isn't quite ready for that yet. Many of applications demonstrated before the crowd of around 4,000 developers will require the widespread adoption of HTML 5 technologies, which are still under development by a consortium of companies and organizations.

However, offstage after his keynote, Gundotra downplayed any conflict with Microsoft, noting that its task in moving toward HTML 5 is more complex because of the large number of enterprises running Internet Explorer, and the possibility that internal applications developed for that browser could break. "As they follow through, they are going to have a huge impact on moving the Web forward," he said.

For example, canvas tags help developers bring all kinds of sophisticated graphics to their Web applications without having to use a plug-in--which is also the appeal of the video tag. Google showed off an "experiment" with YouTube videos coded using the video tags, which gives developers quite a few more options when it comes to how those videos can be embedded into a Web page.

Geolocation is another huge topic of late with mobile applications. Google showed off how its Google Latitude application takes advantage of a new iPhone geolocation API that Apple will release as part of the iPhone 3.0 software to run in the mobile Safari browser. Mozilla's Jay Sullivan also showed off how Firefox 3.5 will come with a button that allows the browser to pinpoint your location in Google Maps using Wi-Fi and cell tower positioning data.

In a briefing session following the keynote, Google's Matthew Papakipos, engineering director, said Google has various aspects of the HTML 5 capabilities demonstrated Wednesday in different parts of the development process. For example, the canvas tags that allow for richer graphics are present in Chrome 2.0, which is currently available, but others, such as the video tags, are farther away from reaching the world.

Mozilla plans to support all the HTML 5 technologies demonstrated Wednesday with the release of Firefox 3.5, Sullivan said. That is expected to arrive fairly soon.

One interesting question, perhaps saved for another day, concerned how, or if, Google plans to index the coming wave of Web applications as part of its search efforts. Attempting to index these rich applications at the moment presents quite a "challenge" for search bots trying to figure out how to categorize the content within an application.