NEW YORK (CNN) -- Someone opened a can of worms on popular microblogging service Twitter this weekend, a company co-founder says, and a 17-year-old told an online tech news network that he was that someone. 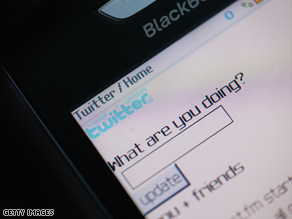 The company deleted some 10,000 infected tweets from at least 190 compromised accounts that could have continued to propagate the virus, he said.

Michael Mooney, a 17-year-old high school senior whose hacker handle is Mikeyy, claimed to be the creator and disseminator of the worms.

In an interview with CNET News, Mooney said that he embarked on the weekend hacking spree because he "was bored."

Some of the rogue tweets directed users to StalkDaily.com, a Twitter-like messaging service created by Mooney. The worm also caused infected accounts to repost tweets that Mooney appeared to have written.

A few Twitter users took to their Twitter pages to vent their frustration with the high jinks. "This little worm needs to have his little bubble burst," wrote user JWMcGregor.

But other Twitterers were less concerned.

"There are risks associated with all methods of news gathering and communication," said CNN's own prolific Twitter scribe Rick Sanchez, who added that Twitter's advantages "outweigh the types of minor annoyances we've seen recently."

Stone said that Twitter is taking steps to make sure this weekend's worm onslaught is Twitter's last such security breach.

"We'll be reviewing our Web coding practices to make sure something like this won't happen again," he said, emphasizing that "no passwords, phone numbers, or other sensitive information was compromised as part of these attacks."

Calls to Mooney were not returned.