(CNET) -- Google has released a new Web-based version of Gmail that gives iPhone and Android phone users a more sophisticated version of the online e-mail service, including access to messages that's faster and that works even when offline. 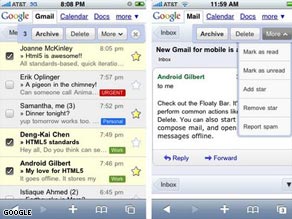 Google demonstrated the Web-based mobile version of Gmail last week and announced its availability Tuesday on the Google Mobile blog.

"You'll notice that it's a lot faster when performing actions like opening an e-mail, navigating, or searching. And if the data network drops out on you..., you'll still be able to open recently read messages and to compose over a flaky, or non-existent, network connection," said Google mobile engineer Joanne McKinley.

Although the new features are interesting, and I find them a big step up, what's significant in the bigger picture is that Google has shown just how powerful mobile Web browsers have become, not just for surfing Web pages, but for running Web-based applications. This mobile Gmail application doesn't have to be downloaded through Apple's App Store or Google's Android Market; it works after you point the browser to gmail.com.

The fact that one Web site can support iPhone and Android today and likely the Palm Pre tomorrow is significant for Google: by putting the application on the Web, the company doesn't have to create separate applications for different devices, as it has with BlackBerry and Android already but not the iPhone.

The relative universality of the Web app sheds light on Google's motivation for supporting Android, too. Google has a strong interest in making mobile devices first-class citizens on the Internet, a move that ultimately will open up new advertising possibilities for the search giant.

The new version is much more elaborate than its predecessor--though not so elaborate that there are ads, as in the regular version of Gmail. Among the new features:

• Multiple messages can be selected then archived, deleted, and marked as read, unread, or spam.

• A floating toolbar--the "floaty bar"--travels with the page as you scroll through a message or through an in-box with selected messages, letting you take various actions without having to scroll to the top or bottom of the page.

• A search button appears at the top of the screen for easier retrieval of older messages. Previously it was buried at the bottom of the in-box.

But the offline access is what sets the application apart. The application stores e-mail messages on the phone itself using the still settling-down HTML 5 standard for Web page design and, in Android's case, using Google's Gears browser plug-in.

That makes messages readable while offline. But it also makes reading messages faster, since they don't have to be retrieved over the network as long as they've been cached on the phone. I noticed a very significant speedup in use--once I endured an initial wait for synchronization while messages were downloaded.

"Gmail for mobile allows common actions such as archive and send to be completed much more quickly than previous releases. The first time you visit Gmail, you may notice that the start-up time is a bit slower than usual. This is because we are downloading required files over the network. However, once the files are downloaded, subsequent launches will be more consistent regardless of connection type," Google told me in a statement.

The offline mode let me compose a message and push the send button; when network access was restored, the Gmail application took care of actually sending it without any intervention on my part. Also while offline, I could perform a search I'd done recently online, though a new search required network access.

The biggest missing piece in my quick test was the ability to add labels to messages. That's in the works, Google said:

"The new architecture of the Gmail web app will allow us to roll out new features much more quickly. The ability to add a label is not available at this time, but it's coming soon," Google said. That statement intrigued me, because Google's 2007 Gmail overhaul for ordinary browsers produced a modular design that permits extensive customization through Gmail Labs.

The iPhone and Android versions of Gmail worked identically once I installed Gears on my T-Mobile G1 after being prompted by a "get faster Gmail" invitation. The iPhone version was more responsive, and both had an awkward time showing HTML-formatted e-mail.