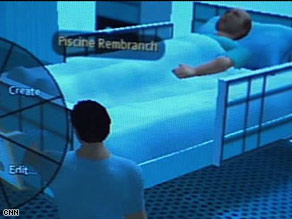 An avatar approaches a virtual patient in a hospital inside the online world Second Life.

It's an interactive, hands-on learning experience -- and none of it is real.

These prospective doctors are treating virtual patients in Second Life, the Internet world where users interact through online alter egos called avatars. The third-year med students are taking part in a pilot program for game-based learning, which educators believe can be a stimulating change from lectures and textbooks.

"The aim is to develop a more engaging learning environment, rather than just replicate what you have in real life," said Maria Toro-Troconis, a senior learning technologist at Imperial College London. "Game-based learning plays a very important role."

From a real-life classroom, students sit at computers and enter a virtual Second Life hospital whose detailed grounds are designed to resemble Imperial College London. There's a 3D replica of the landmark Queen's Tower and signs pointing students toward the respiratory ward.

The students pair up for the study, but they are allowed to collaborate only through their avatars. "Don't talk to each other in the physical world," Toro-Troconis told them. iReport.com: Read about a visit to the Imperial College virtual hospital

After the avatars enter the computer-generated hospital, they check in at a reception desk, put on an access badge, and then stop by professor Martyn Partridge's office to get their assignment. Partridge's online likeness bears an eerie resemblance to his real-life appearance.

If students forget to wash their hands before visiting a patient, their investigation is halted.

Then students enter a patient's room and their work begins. Because their assignment takes place in a respiratory ward, they can access recordings of real-life patients' breathing to help with their diagnoses. And if students decide that X-rays are needed, they can stroll down to the radiology department and order them.

All these steps are designed to reinforce lessons about responsibility and hospital protocol.

"This sort of research is vital if we're going to make sure tomorrow's doctors are as well-trained as you and I want them to be," said Partridge, professor of respiratory medicine at Imperial College London.

Created by Linden Lab in 2003, Second Life is a free, 3D virtual world where digital personas travel, work, play and socialize through chat rooms and other online gathering places.

Millions of users enter Second Life daily to meet friends, play music and even buy and sell property, while many companies, universities and organizations have an online presence in Second Life.

Medical students at Imperial College London began their Second Life training without knowing what to expect. Most of them had heard of Second Life, but none were current members.

The students unanimously agreed they preferred walking the wards of real hospitals and interacting with real patients. But the novelty of this new way of learning wasn't lost on them.

"I've had two years of just lectures and books," said third-year medical student Khayam Sheikh. "I think this is a nice way to break it up."

Such game-based education is not intended to replace traditional face-to-face training. In fact, it's not part of Imperial College London's official curriculum. But educators see the program -- which is available online 24 hours a day, seven days a week -- as a way of connecting to today's wired, computer-savvy students. iReport.com: Explore a virtual hospital in Second Life

"You'd like to say this makes learning fun and easy," says Jenny Higham, Imperial College London's head of undergraduate medicine, "[but] at the end of the day, there's still a basic requirement to learn the facts."

Toro-Troconis is looking into possible partnerships with other universities around the world. She envisions a day when nursing students from Australia use Second Life to collaborate with physical therapists from Japan and medical students from the U.S. -- all of them playing, and learning, together in a virtual environment.

"We have to recognize our students come equipped with incredible computer skills," Higham said. "It's a new way of learning for them."