Safety council urges ban on cell phone use while driving

(CNN) -- The National Safety Council called Monday for a nationwide ban on cell phone use while driving, a prohibition opposed by the industry. 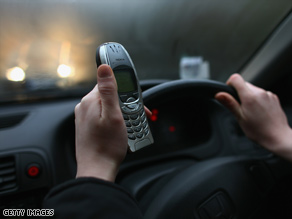 "Studies show that driving while talking on a cell phone is extremely dangerous and puts drivers at a four times greater risk of a crash," said Janet Froetscher, the council's president and CEO, in a news release, referring to a 1997 New England Journal of Medicine examination of hospital records.

"Driving drunk is also dangerous and against the law. When our friends have been drinking, we take the car keys away. It's time to take the cell phone away," Froetscher said.

Though six states have enacted laws banning the use of hand-held cell phones in cars, no state has a total ban on cell phone-use while driving, the NSC said.

The council cited research from the University of Utah that says hands-free devices do not make safe the practice of talking on the phone while driving.

The council also cited a 2003 study from the Harvard Center of Risk Analysis that estimates cell-phone use at the wheel contributes each year to 6 percent of crashes, resulting in 330,000 injuries, 12,000 of them serious and 2,600 of them fatal.

It put the estimated annual financial cost of cell-phone-related crashes at $43 billion.

NSC spokesman John Ulczycki was unswayed. "We understand that economists want to measure the value of things in different ways," he said in a telephone interview. "We think this is a significant contributor to injuries and deaths."

The council is sending letters this week to governors and state legislative leaders asking them to pass state bans.

Ulczycki said the goal will not be easy to reach. "This would not be a popular position for a politician or a government official to take," he said. "We hear objections from people who think we've got too much government."

The cell-phone industry opposes any such ban.

"Laws aimed just at wireless use create a false sense of security with regard to the issue of distracted driving," the agency said in a posting on its Web site.

"We believe there can be safe, sensible, responsible use for a brief period of time," said John Walls, CTIA's vice president of public affairs, in a telephone interview.

CTIA said cell phones are being unfairly singled out from a raft of other potential distractions that could affect safety.

"Numerous studies cite reaching for moving objects, drowsiness, pushing audio buttons, eating, personal grooming, other passengers and reading as some of the many other potential driving distractions," the organization said. "Wireless use has often been listed behind many of these activities in terms of how distracting of a behavior it might be while driving."

NSC spokesman Ulczycki agreed that other distractions in the car can also prove dangerous, but said, "None of them are as serious as talking on a cell phone."

In addition, he noted, cell phones are nearly ubiquitous, with 90 percent of the nation's 300 million residents having a cell-phone account, according to CTIA.

A Nationwide Insurance public opinion poll reported that 81 percent of the U.S. drivers say they use cell phones at the wheel.

Last November, the American Medical Association adopted a policy advocating for state laws that would prohibit the use of texting while driving, but did not include talking on cell phones.