Google vs. Apple: The battle to rule mobile applications

HONG KONG, China (CNN) -- So what's your list of top 10 mobile applications of 2008? Does it include Twitterberry, Facebook, MySpace, BioWallet, Locale? Or do you favor Super Monkey Ball, Koi Pond, iSteam, iBeer or iFart? 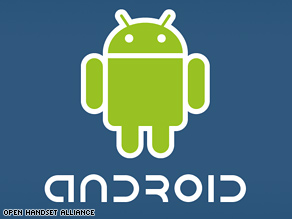 Google's Android operating system may lack the sleek body of Apple's iPhone, but it's catching up.

If any one of your preferred applications was among the latter five, chances are you have an iPhone or iPod Touch -- applications developed for Apple's mobile platform only work on Apple's mobile devices. And so far, most of Apple's best-selling apps are familiar brands, social networking, games or novelty.

Yet thanks to Apple's proprietary, vertical and exclusive way of doing business -- making the iPhone highly desirable and its accompanying App Store highly accessible -- the general public demand for mobile applications of all kinds is finally taking off.

"As soon as the iPhone SDK (Software Development Kit) was first released [in July 2008]," says John Lema, co-founder of ScrollMotion, "we realized that this was going to be a great opportunity for consumers and content providers, and we dedicated our efforts to developing platforms for iPhone and similar devices."

In particular, ScrollMotion's upcoming Iceberg Reader, the first application to partner with several major publishers of copyrighted books, promises to make full use of the iPhone/iPod Touch as a fully functional e-book reading device.

"Apple has built an incredible SDK for the iPhone/iPod Touch," adds Kayvon Beykpour, co-founder of Terriblyclever Design, whose iStanford app provides a living guide and working tool for Stanford students. (The free application was downloaded more times than there are individuals registered on the California Bay Area campus.)

"It's not just a recent development, it's the product of years of work that went into the Cocoa platform back from the NextStep days. That platform, combined with the equally important distribution platform, make the iPhone/App-Store a killer combo for developers," said Kayvon.

Apple may hold the winning hand for now, but ever since Google's open-source operating system was announced in November 2007, Android has been gradually creeping out of the shadows to challenge Apple's dominance of the mobile applications market.

"Mobile devices are essentially small computers that have the capability to do so much, yet carriers have purposefully disabled them for corporate profit," says Phandroid founder and evangelist Rob Jackson. "The 'walled garden' comes in the form of proprietary operating systems."

"Android, on the other hand, is about enabling users, knocking the walled garden down. Google's philosophy, in everything, seems to be: Provide the best and most extensive service you possibly can and people will love it... and then monetize it.

Applications want to be free

Even if Apple is where the money is, it is no coincidence that unlocking (opening to another mobile phone carrier) and jail breaking (opening to other platforms) the iPhone is so popular -- because applications want to be free.

Shazam, a pioneer in live music identification via mobile phone, released both its iPhone and Android versions shortly following the launch of each platform's applications store. On Android, each Shazam-tagged song is seamlessly linked to the Amazon MP3 Store as well as the artist's MySpace page.

Loopt, another application that adds the dimension of physical location to social networking, is a favorite of Scott Webster, editor of AndroidGuys.

"Location-based apps that run in the background will help separate Android from other operating systems," he says. "It's simple to find out where your friends are at any given moment and see what they are up to. You can let the app run in the background of your G1 (or other Android device) and constantly give people updates as to your whereabouts."

In Loopt for iPhone, "users must be logged in and ping locations from people, [whereas] Android owners will be able to enjoy always-on, always-available status."

Still, there is no shortage of developers who continue to apply to download Apple's SDK for the ever-marketing-savvy price of $99. Not only does Apple build excitement, it creates desire.

Meanwhile the relatively unassuming Android is open source, free to download and document, and is the flagship software of the 48-member-strong Open Handset Alliance.

As for monetary remuneration, paid Android applications are already available from third-party sites such as Handango and MobiHand's OnlyAndroid, but will also soon appear in the official Android Market.

However security is always a concern in such open environments, and device-specific nuances may vary uncontrollably from handset to handset. But if this sounds vaguely familiar, perhaps we can recall the relationship between Web browsers and the Internet circa 1995.

"Open and closed platforms each have their own set of pros and cons," observes Alex Ahlund, founder of AppVee.com, a site that offers comprehensive reviews of applications for both iPhone and Android.

"On the plus side, with Android being so open, developers can take advantage of all the features of a device and release applications without [Apple's] lengthy (and sometimes, unpredictable) approval process. The flip side to that is a platform loses its ease of use, elegance, and filter when there are no proper gatekeepers."

As they said in the prime time of the dot-com bubble: Developers hate designers because they dress nice and have friends; designers fear developers because they have the power to make the magic. Does Android hate Apple any more than Apple fears Android?

And in particularly wired and trend-conscious societies such as Hong Kong, South Korea and Japan, it's often the handset that sells the rest.

"No matter how good the iPhone is, it will not be able to come up with new models every month compared to Symbian- and Windows-based phones," remarks Dr. Lawrence Cheung of the Hong Kong Productivity Council.

"I am a bit skeptical about the gPhone. The slim and sexy look of a phone is particularly important in Asia," says Cheung.

Ahlund is more optimistic for Google's flagship OS: "The long-term potential market share is what gives Android the edge. The iPhone is going to continue growing with a massive community and hardware updates to keep up with new mobile demands, but in my opinion Android is and will be the de facto operating system for most future handsets."

"We are going to see a huge shift in the next five years," he continues, "with a lot of our computing life being pulled away from the desk (and lap) into our pocket. We're constantly evolving as a mobile society, and since we have finally realized that processing power and ease of use is possible without being plugged-in and stationary, we're going to start seeing more and more digital nomads."

We have already verbalized "googling" for searching on the Web. The question now is, will the next branded synonym of "smartphone" be iPhone or gPhone?