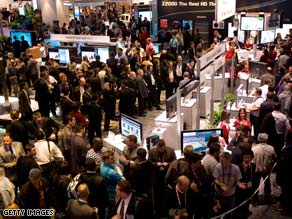 With many Americans struggling to pay bills, find jobs and even avoid foreclosure, it may seem like an extravagance to spend hundreds of dollars on a laptop or a digital camera.

But financial fears also are causing consumers to spend more time at home, where they still want to be entertained. Industry observers believe this nesting trend could sustain demand for products -- Blu-ray players, stereos, video games, cheap computers -- that brighten the family room while easing the sting of canceling that Disney World vacation.

"We're about to experience a renaissance in in-home entertainment," said Scott Steinberg, publisher of DigitalTrends.com. "History proves that even during times of recession, people are willing to invest heavily in great escapes, and products that take their mind off the concerns and vagaries of everyday life.

"That being said, consumers are becoming smarter about how they spend their money," he added. "This year's mindset will be less about luxury than convenience, and a specific gadget or technology's pure ability at the end of the day to get the job done."

Watch some of the gadgets already getting attention »

With an uneasy eye on the economy, tech companies seem to be scaling back expectations for CES, which kicks off officially on Thursday. Attendance will likely be down about 8 percent, and few blockbuster announcements are expected. Industry heavyweights also are downsizing the usual slate of lavish corporate parties that in 2006 saw the Foo Fighters gigging for Motorola and Intel hosting The Black Eyed Peas.

"The pre-buzz has really been a lot quieter than it's been in recent years," said Kent German, a senior editor at CNET.com, who is attending his fifth CES. German believes more tech companies are choosing to launch products at other times of the year when they don't have to compete for attention.

Even so, as the biggest annual showcase of new tech products, CES will always make headlines. After all, past shows have introduced the world to the CD player and the plasma TV. This year's trade show, which wraps Sunday, features 2,700 exhibitors, including the CES debuts of such marquee companies as Blockbuster, Electronic Arts, Mattel and Verizon Wireless.

"It's not going to be exactly the same. Attendance is going to be down," PC Magazine editor Dan Costa told CNN. "But it's still a massive show. And there's going to be a lot of news there." iReport.com: Are you excited about CES?

So what trends and products will be making news most often at CES? Based on a scouring of tech blogs and interviews with industry observers, here's a brief roundup of what will be hot in Vegas this week:

Netbooks. In a weak economy, these small and cheap laptops will continue to be popular. Already loaded with Wi-fi, webcams and other features, these ultra-portable computers will soon come with GPS and touch screens as well -- all for prices under $500. Look for a new wave of them at CES.

Thin OLED TVs. You've heard of LCD and LED -- now meet OLED, which stands for organic light-emitting diode and creates a gorgeous picture. For now, they're also way too expensive -- Sony's XEL-1, the world's first OLED TV, costs $2,500 for an 11-inch screen -- but they're cool to look at. The screen panel on the Sony model is only 3 millimeters thick.

"Sony has showcased its OLED TVs at CES before, but expect to see larger-size prototypes from them and from Samsung, who's said it plans to show its version of the technology as well," said CNET news reporter Erica Ogg.

Mobile devices. Touch screens, once limited to high-end smartphones such as Apple's iPhone, are filtering down to mid-range devices as well. Cell phone manufacturers also are increasingly building phones that shoot sharper photos and better video.

The biggest buzz might be building around Palm (remember the Palm Pilot?), which is looking to regain relevance with the launch of an overhauled -- and much-hyped -- Nova operating system for its mobile phones.

"I'm very interested to see what Palm has to say," said CNET's Ogg. "The company really needs a hit -- it has fallen so far behind its competitors like RIM and Apple in terms of smartphone innovation that Palm really has to hit this one out of the park."

Wireless home electronics. Will this mark the year we can finally say goodbye to that cumbersome tangle of wires behind our TVs and stereos? Probably not, but we're getting there.

"I wouldn't go so far as to say that the wireless revolution is completely in full swing, but it's definitely patiently waiting its turn at bat," he added. "All the market lacks at the moment is standardization, and a core catalyst -- a single, unifying code of conduct that enables media of all sorts to play well together on devices of all sorts."

More "green" products. Motorola is rumored to be launching a phone made from recycled tech waste. And at least several manufacturers are promising to unveil pioneering, environmentally safe batteries -- including one made without lithium or lithium ion.

Downloadable video players. "We're going to see a lot of devices that offer downloadable video, be they Blu-Ray players [or video game consoles]," said Costa of PC magazine, who believes prices of Blu-ray players will keep dropping. "All these devices can download video over the Internet, some of it in HD quality. That's the type of device we're going to see a lot more of, and it makes perfect sense when people are looking to nest [at home]."