(CNN) -- The Twitter accounts of President-elect Barack Obama, CNN anchor Rick Sanchez, Britney Spears, Fox News and 29 others were hacked Monday according to the microblog site, leading to false and inappropriate messages being posted on their accounts. 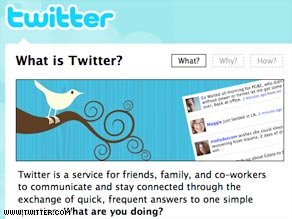 The microblog site Twitter was hit with phishing scams and hacker attacks during the last three days.

CNN anchor Rick Sanchez, who uses Twitter on his TV show to interact with the audience, also fell victim to the scam, when a hacker posted about drugs on his account.

Twitter is a social-networking blog site that allows users to send status updates, or "tweets," from cell phones, instant messaging services and Facebook in less than 140 characters.

Twitter co-founder Biz Stone wrote on the site's blog that the accounts were compromised after a hacker accessed tools the support team uses when a Twitter user can't remember or wants to reset their login info.

"We considered this a very serious breach of security and immediately took the support tools offline," Stone said in the blog post. "We'll put them back only when they're safe and secure."

"As a result, some Twitter users may have received offensive messages attributed to Rick when the breach occurred," she said. "This is annoying, though such breaches are not uncommon when using social networking sites."

"Rick has notified Twitter of his account's breach and taken some basic steps to secure his account's access. Rick enjoys communicating with viewers via Twitter and he and many others at CNN find social networking a valuable tool in their shows. Rick will continue to use Twitter -- along with MySpace and Facebook -- to engage CNN's audience."

The attacks came after Twitter suffered a vicious phishing scam over the weekend, during which everyday Twitter users may have been tricked into logging on to a page masquerading as the Twitter front page, according to the site.

Instead, users were actually giving out their login information. The fake link was then passed along to anyone following that user.

Twitter posted a small notice on the page of each user warning them about the attacks.

But some users, concerned about the attacks, began messaging Twitter employees.

"So you're OK with a status quo where any Twitter [application] is potentially a phishing scam?" Twitter user "Aral" posted on the account of Alex Payne, a developer at Twitter. According to his Web site Payne is in charge of working with programmers who develop their own applications that work with Twitter.

"I'm certainly not happy with the security status quo. I just want people to understand the different threats. We'll get there," Payne responded.

The attacks are the first known security issues with Twitter, which has grown as a popular social networking site during the last year.

The attack on Twitter indicates hackers may see social networking sites as a good place to try and steal passwords and account information from the most people.

While many of the accounts were fixed quickly by resetting passwords, the attacks are a reminder for Twitter that with increasing popularity comes more security risks. iReport.com: Scammers 'phishing' on Twitter

And those risks have kept employees at Twitter working quickly to try and fend off attacks and fix compromised tools.

"Mood at Twitter HQ the first work day of the year: Focused Anxiety."