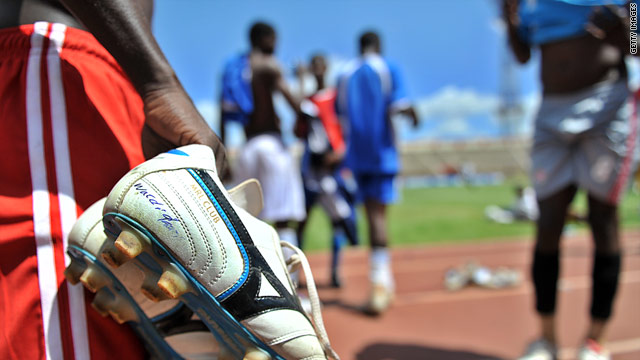 Players warm up at the recent Cecafa Cup in Kenya. About half the Eritrean team did not go home.
STORY HIGHLIGHTS

(CNN) -- Kenyan police are searching for 12 members of the Eritrean national soccer team who failed to return home after competing in a regional tournament in Nairobi, a spokesman said Monday.

The missing players make up nearly half the 25 players and coaches Eritrea sent to the Cecafa Cup, a tournament for nations from east and central Africa. Team organizer Nicolas Musonye alerted police when only 13 team members departed after the tournament finished Sunday.

None of the 12 missing has a visa to remain in Kenya, national police spokesman Eric Kiraithe said.

"The men were last seen on Sunday after the tournament ended," Kiraithe said. "They had requested a police escort to and from the stadium for the game, but had some free time after the game and absconded from their hotel."

Kiraithe said the men were likely to be found soon.

"Being players who we have escorted during the tournament, it is not like they are unknown to us. The possibility of them [successfully] hiding themselves from us is very limited," he said.

The Eritrean government originally denied the absence of any players. But Information Minister Ali Abdu told the BBC on Tuesday they would get a "good welcome" on return despite "betraying" their country, which human rights groups have called increasingly repressive.

The Eritrean team lost in the Cecafa Cup quarter-finals, with returning champions Uganda winning the two-week event. Musonye said it was not the first time Eritrean players have tried to avoid returning home: A similar incident occurred during the 2006-7 tournament in Tanzania.

"For the next Cecafa Cup, we have decided to have a police escort for the Eritrean team for the whole duration," Musonye said.

For the next Cecafa Cup we have decided to have a police escort for the Eritrean time for the whole duration.
--Cecafa Cup organizer Nicolas Musonye
RELATED TOPICS

Police have received no requests for asylum from the men, and unless they have proper visas, they will be sent back to Eritrea when found, Kiraithe said.

The Refugee Consortium of Kenya, a nonprofit organization that gives free legal aid and representation to asylum seekers and refugees, would not comment to CNN. But an official speaking on condition of anonymity told the Canadian Press that 12 players had sought their help, and their case for asylum would be presented to the U.N. High Commissioner for Refugees.

Eritrea is under the rule of President Isaias Afwerki, whose government has imprisoned critics and exerted increasingly authoritarian controls over the economy, media and religion, according to U.N. reports and human rights organizations.

The United States accuses Eritrea of arming Islamic insurgents who are trying to topple Somalia's U.N.-backed transitional government. Eritrea denies the allegation, but Uganda, which leads an African Union peacekeeping mission in Somalia that has taken heavy casualties during the insurgency, has sought U.N. sanctions against the Eritreans as a result.

Eritrea won independence from Ethiopia in 1993, and the two countries fought a two-year border war in the late 1990s. Eritrean forces also clashed with troops from neighboring Djibouti in 2008.

CNN's Ben Wyatt in London contributed to this report.