LONDON, England (CNN) -- The Phenomenon is back. You may not have recognized him when he came on as a substitute for Corinthians in a Brazilian Cup match, though. After all, he's a few kilos heavier than the Ronaldo we grew to know and love in the last decade. 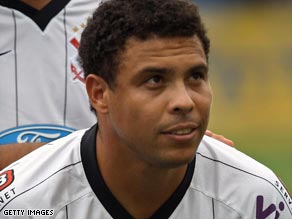 Comeback Brazilian: Ronaldo is playing competitive football again -- but will he reach his former glory?

However, at 32 years of age, Ronaldo Luis Nazario de Lima is attempting another comeback. Will it be a successful one?

As far as I am concerned, it won't.

Debate: Do you think Ronaldo can return to his former glory? Tell us in the Sound Off box below.

I have had the privilege of interviewing Ronaldo various times, and spent some one-on-one time with him in Italy and France. He's a great guy, friendly, humble and fun-loving.

However, that last personality trait has contributed to a turbulent career and lifestyle. Wherever he has gone, the striker has always made his mark, on and off the field. While he was helping Barcelona, Inter Milan, Real Madrid and Brazil win a multitude of titles, he also found himself in the headlines a multitude of times for all the wrong reasons.

It's true that Ronaldo has always been unfortunate with injuries - he has undergone three major knee operations. However, his love for a night out and for a playboy lifestyle may have also contributed to the breakdown of his body.

In my opinion, this is the reason he will struggle to stay fit and motivated for Corinthians this season. There are too many temptations for him in Brazil, and I don't see him being able to resist all of them.

Furthermore, he has won practically everything there is to win in the world of football, with the exception of the Champions League.

So it would be fair to say that he's not going to bend over backwards to make sure his new team wins some silverware this season. He will score the odd goal and make the odd highlight, but I don't expect his latest comeback to be a success.