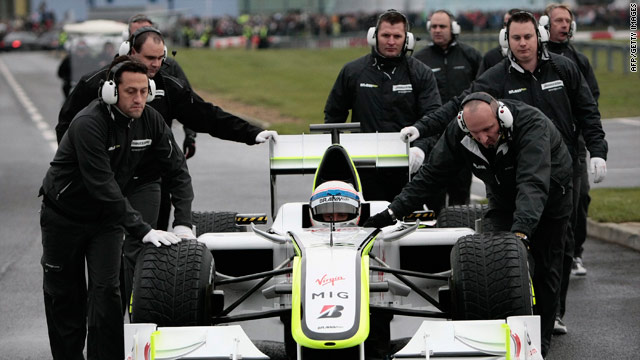 The Brawn GP team have been taken over by German car manufacturers Mercedes-Benz in time for the 2010 season.
STORY HIGHLIGHTS

(CNN) -- Mercedes-Benz will head up their own Formula One team next season after the German car manufacturer confirmed they have taken a 75.1 percent share in Brawn GP -- with Ross Brawn remaining as team principal.

Mercedes engines powered Brawn's Jenson Button to the world championship this season -- while the team also claimed the constructors' championship.

Meanwhile, Lewis Hamilton, Button's predecessor as world champion, was also sitting behind a Mercedes engine in his McLaren.

The partnership between McLaren and Mercedes has been in place since 1995 and ended its 15th season together in 2009.

The new team will become known as Mercedes Grand Prix, with Brawn in control, while Mercedes-Benz Motorsport vice-president Norbert Haug will work with the F1 team and the engine team of Mercedes-Benz High Performance Engines.

As part of the deal, Mercedes' parent company Daimler AG relinquished their 40 per cent stake in McLaren, but will remain their engine suppliers for the next six seasons.

Daimler AG chief executive Dr. Dieter Zetsche explained in a press release: "Mercedes-Benz is the most valued and best-known premium automotive brand in the world.

"This brand looks for competition of the utmost quality in all relevant fields in order to continually improve its performance in the face of such new challenges.

"Due to the new Formula One environment, we will face the competition in future on the most important motor sports stage with our own Silver Arrow works team.

"Our new Silver Arrow Formula One team is a great sporting and technical chal-lenge and we will tackle this with sporting spirit and full of enthusiasm."

The move could have ramifications for the out-of-contract Button, with Mercedes believed to favor an all-German partnership of Nico Rosberg and Nick Hiedfeld.

Such a move could see Button link up with Hamilton at McLaren and the 29-year-old was believed to have toured McLaren's Woking factory last week.

Brawn, who has previously baulked at meeting Button's wage demands, was thrilled with the deal after forming Brawn GP following the withdrawal of Honda from the sport.

"We are honored to be representing such a prestigious brand as Mercedes-Benz in Formula One next year and will be working together to do our best to reward their faith in our team," said Brawn on the team's official Web site.

"Brawn GP has been through an incredible journey over the last 12 months. From fighting for our survival to forging a strong relationship with Mercedes-Benz High Performance Engines, winning both the constructors and drivers world championships, and now accepting Daimler's offer to buy our team, which will secure its future," he added.