(CNN) -- New 800 meters world champion Caster Semenya has arrived back in South Africa to fresh controversy over levels of testosterone in her body three times higher than normal for women. 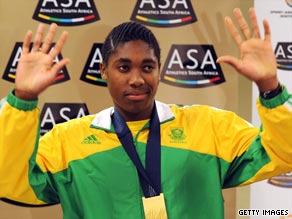 Semenya shows off her gold medal after returning to South Africa as the world 800m champion.

Semenya, who is facing tests on her gender by international athletics body the International Association of Athletics Federations (IAAF), provided samples before the World Championships in Berlin which showed the high levels, Press Association Sport has revealed.

Higher-than-normal levels can occur naturally but the 18-year-old will now be subject to detailed scrutiny to decide whether that really is the case in this instance.

The new development did not dent the enthusiasm with which Semenya was welcomed after touching down in Johannesburg with her South African team-mates on Tuesday morning.

Thousands of supporters crammed the airport waving placards, singing, dancing and hoping to catch a glimpse of the teenager.

Leonard Chuene, president of Athletics South Africa, called for the matter over her gender to be laid to rest.

He told reporters: "We have not once, as ASA, doubted her. It's very simple: She's a girl. We took this child to Poland to the junior championship under the International Association of Athletics Federations (IAAF).

"Why was there no story about it? She was accepted there. No-one said anything there because she did not do anything special.

"She is the same girl. No-one asked why did we take her. She went to Mauritius and ran well, suddenly everyone noticed her. You say we didn't do much to protect her. What did you want us to do?

"As ASA we didn't have any of this information (on her gender) that people wanted us to protest about. When you go to dope testing, you go with a woman and she can see you are a woman.

"When you are born, you can see whether you are a boy or girl. You don't test children in the lab to confirm."

It is understood the IAAF have been monitoring Semenya for some time following incredible improvements in her performances in the last 12 months culminating in her gold medal victory in Berlin.

The IAAF had asked the South Africans to withdraw her before the race but news of the gender test leaked out by accident because a fax was sent to the wrong person.