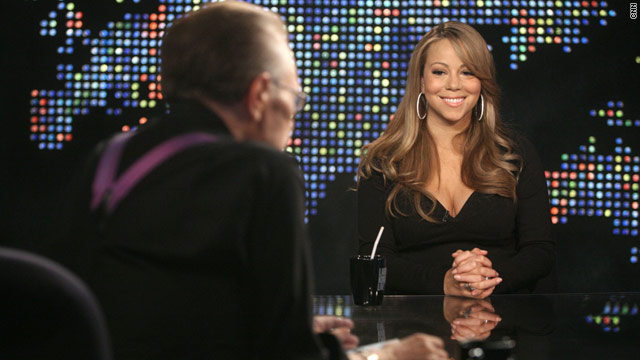 Los Angeles, California (CNN) -- Mariah Carey gulped "ugly juice" for her role as a dowdy social worker in "Precious," a film performance that may free her from painful memories of box office bomb "Glitter."

Carey told CNN's Larry King she would like to take on the real life role of a mother -- but only after her career obligations slow down "because I cannot do the having-a-child thing halfway."

The interview -- airing on CNN's Larry King Live Wednesday -- also explores the singer's thoughts on her marriage to Nick Cannon and Chris Brown's assault on Rihanna.

"Glitter" -- an almost-autobiographical movie -- was panned by critics and ignored by fans in 2001. The only honor she got from it was a "worst actress" Razzie.

Despite a physical and emotional breakdown that sent her to a hospital in July 2001, Carey said she never doubted she would bounce back.

"Never, because I have so much faith," she told King. "And I'll never lose my faith, ever."

Her new album -- "Memoirs of an Imperfect Angel" -- sits on top the R&B charts.

And she has a small, but impressive part in Lee Daniel's critically-acclaimed "Precious." Instead of Razzies, the buzz this time is about Oscars.

Daniel -- a friend with whom Carey has worked before -- called her just three days before shooting was scheduled to replace Oscar-winning actress Helen Mirren in the role, she said.

Carey, 39, is a star who arrives for interviews with her own photography director to make sure camera angles and lighting are flattering. Her character, though, was far from the glamorous image she's cultivated for years.

She joked that she drank "ugly juice" to prepare for the role.

"It's this really good stuff. I'm going to market it," she said. "It's called 'I want to be in the movie, and this is what's required.' I've been working on my craft for a long time. People never want to let go of the whole 'Glitter,'... I'm like, 'It's eight years later, people. Let's move on.' "

Carey was at first evasive, but finally denied King's question about rumors she was pregnant.

"It would be the happiest thing in my life, but what I'm saying is, right now with this movie coming out, with the next few singles from the album and those things that I'm doing, I need to focus on that because I cannot do the having-a-child thing halfway," she said.

Carey said she would first cut back on her work.

Carey will always be in show business, she said.

"Come on, I can't help it," she said. "It's in my genes. My mother was an opera singer. I'm clearly dramatic."

She married Cannon in April 2008 after they "connected on a lot of levels." He was her first real love, she said.

She's 10 years older than Cannon, but she insisted the age difference is not an issue.

"I really don't like being a grown-up," she said. "It's not fun and I never wanted to be a grown-up. But then I have to go into my business."

She said it is hard for her to understand the physical abuse between her friends Rihanna and Chris Brown because she was "very sequestered" when she was a younger star. "I wasn't really allowed out of the house, so I can't imagine what she went through."

"If I were just allowed to be young and with a young boyfriend who's also a star and you know, you're working and you're both -- I don't know what goes on," she said.

Carey said she suffered what she described as emotional and mental abuse in her first marriage.

"For me to really get out, it was difficult because there was a connection that was not only a marriage, but a business thing where the person was in control of my life," she said.