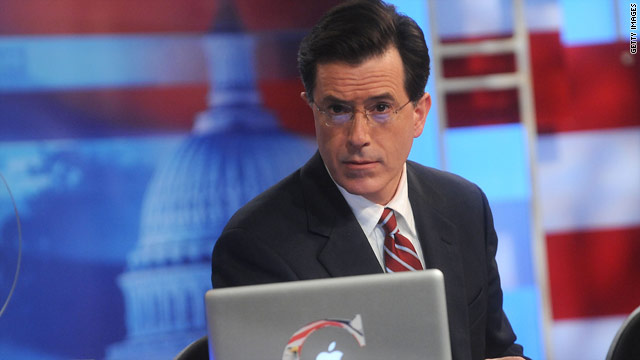 The "Colbert Nation" will be the primary sponsor of the U.S. speed skating team, the comedian announced on his show.
STORY HIGHLIGHTS
RELATED TOPICS

(CNN) -- Stephen Colbert may have lost his bid as an underdog presidential candidate last year, but he still wants to represent America any way he can.

The "Colbert Report" host said that his viewers. the "Colbert Nation," will now be the primary sponsor for the U.S. Olympic speed skating team when the squad goes to the 2010 Winter Games in Vancouver, Canada.

"We must ensure that it is America's 38-inch thighs on that medal platform!" Colbert exhorted.

Bob Crowley, executive director of US Speedskating, said Colbert "embracing the US Speedskating Team will provide immeasurable exposure for our sport and very talented athletes."

The team has quite the track record, including 75 Olympic medals and such alumni as Dan Jansen, Bonnie Blair and Eric Heiden. It ranks as the most successful of any United States winter sports team.

Donations can be made via www.colbertnation.com or through US Speedskating's site.

US Speedskating is a nonprofit organization recognized by the United States Olympic Committee and the International Skating Union.