(CNN) -- It's just one thing after another for Richard and Mayumi Heene. They've caused such an uproar after last week's alleged balloon boy hoax that Lifetime won't air a re-run of their "Wife Swap" episode. 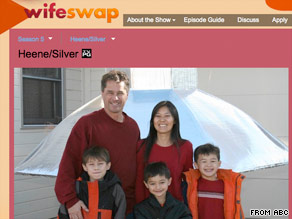 The Heene family's "Wife Swap" episode has been pulled from Lifetime's programming schedule.

Those who pay close attention to TV Guide would have noticed that the Heene family's first episode for the ABC reality show was scheduled to air on Lifetime on Thursday, October 29, at 2 p.m. ET.

"It was on the schedule long before the incident," a Lifetime spokesperson said. The incident refers to the giant, homemade balloon that sailed over Colorado on Thursday, purportedly carrying 6-year-old Falcon Heene.

The bubble burst when authorities discovered Falcon had been hiding in a box in the attic. During an interview with CNN's Wolf Blitzer, the Heene's asked Falcon why he didn't come out as they searched for him, and the boy replied, "You guys said we did it for a show."

That triggered an investigation that revealed the frightful incident was a hoax, police said. Richard and Mayumi Heene are now facing a number of local charges, and the Federal Aviation Administration has begun its own balloon boy investigation, officials said.

As a result, Lifetime has decided to erase the family's "Wife Swap" past from the network.

"Once we found out" [it was allegedly a hoax], the spokesperson said, "we decided to pull it off the air. At this time, we don't have any plans to air it in the near future."

The episode depicted Karen Martel, whose husband runs a child-proofing business, as being shocked "as the Heene kids jump off banisters and run wild, and appalled by Richard's attitude to women," according to the description on ABC's Web site. "Wife Swap" asks its participants to switch places for two weeks.

"Meanwhile, at the Martels'," the description continued, "Mayumi Heene sees safety gates everywhere and wonders how the family [has] fun. She asks the kids about their anxieties and confronts Jay about the climate of fear in his house."

Lifetime plans on filling the time slot with a "Wife Swap" episode that features another family, but rest assured, the Heene's reality TV debut can still be found on YouTube.