Mackenzie Phillips: Dad wanted me to be his wife

(CNN) -- In an interview with Oprah Winfrey that aired Wednesday, Mackenzie Phillips said that she was raped by her father while still a teenager. 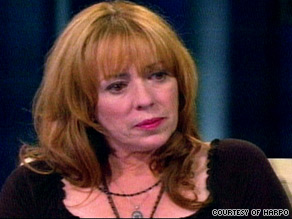 Mackenzie Phillips described an incestuous relationship with her father during an interview with Oprah Winfrey.

"I woke up that night from a blackout and found myself having sex with my own father," Phillips read aloud from her book, "High on Arrival," during the hour-long interview with Winfrey.

"I came out of that blackout and realized what was happening. ... I slid right back into it and woke up the next morning in my own hotel room and not with him," she continued to read. "Your father is supposed to protect you, not [expletive] you."

Phillips, now 49, said she was 17 or 18 the first time she can remember having sex with her father.

Watch Phillips talk about her struggles »

When she confronted him and told him they needed to talk about how he raped her, Phillips said, he responded with confusion.

Her intimate relationship with her father, the famed Los Angeles musician and co-founder of the Mamas & Papas, didn't end there, she told Winfrey.Oprah.com: Staying sober was like flipping her father off, says Phillips

"Over time, in 1980, I'm on the road with my Dad in the New Mamas and Papas, and I begin waking up after drug-fueled events with my pants around my ankles and my father sleeping beside me," Phillips recalled. "It didn't happen every day, it didn't happen every week, but it certainly happened many times. If you're me, you box it away. It's one of those things where you tell yourself don't look. There's a video reel playing in my head, and I've spent 30 years trying not to look." Read about John Phillips' sometimes troubled life

Get all the shocking details on the Mackenzie Phillips story from TV's most provocative entertainment news show.
Tonight, 11 p.m. ET/PT on HLN

By the time Phillips turned 29, it had become a consensual relationship, she said, although she was very much aware that it was wrong and shouldn't have been happening. "It was the Stockholm syndrome where you begin to love your captor. I felt love for my father, but the moment he tried to make it a romance, I was shot into the present time."

This epiphany came after the pair toured with the New Mamas and Papas in Hawaii, where Phillips had adjoining rooms with her father. She said she rarely went to her own room during that trip, and one night she found herself in bed next to her father in a drug-induced stupor.

"Dad said, 'We could just run away to Fiji, and we could take [his children] Bijou and Tamerlane and raise them as our own,' " Phillips recounted to Winfrey. "He was delusional, talking about living with me as man and wife, and raising my siblings, his children, as our children. The moment he tried to make it romantic, I thought, we're going to hell for this."

But that wasn't the moment that caused Phillips to end it completely. It wasn't until the mother of one found herself pregnant again and didn't know whether the father of the baby was her then-husband, Shane Fontayne, or her own father.

"I was in a relationship with my son's father as well; he knew nothing," she said. "He's one of the dearest men and one of the best parents to our son. He was always there for me. I came up pregnant, and I had an abortion. And I never let [John Phillips] touch me again."

"I am stunned by Mackenzie's terrible allegations about her father," Waite wrote. "I would often complain about her overly familiar attitudes towards him, and he said it was just her way. John was a good man. ... He was incapable, no matter how drunk or drugged he was, to have sexual relations with his own child."

"McKenzie's drug addiction for 35 years has been the result of many unpleasant experiences," Michelle Phillips, John Phillips' second wife, told CNN in a statement. "Whether her relationship with her father is delusional or not, it is an unfortunate circumstance and very hurtful for our entire family."

Mackenzie Phillips acknowledged that her family members aren't happy about her decision to release the secret she said she's held for more than 30 years, but during her interview with Winfrey, she did have one sister in her corner: her on-screen sibling Valerie Bertinelli.

Bertinelli played Phillips' younger sister on the 1975-84 sitcom "One Day at a Time." Bertinelli said she has watched Phillips struggle with drugs and alcohol for years but never knew the reality of what Phillips was going through.

Neither of them had seen each other since Phillips was arrested in Los Angeles International Airport in 2008 for drug possession; she was en route to meet Bertinelli and the rest of the cast for a "One Day at a Time" reunion on "The Rachael Ray Show."

Watch Phillips talk about her arrest »

"I've always had a lot of regrets," Bertinelli said, "because I experimented right along with Mack. I did coke, and I did it with her, and no one ever knew about it. And I've had guilt that this incredibly sweet, big-hearted woman [was blamed] for things [that] in my mind weren't really her fault."

Phillips also talked with Winfrey about her drug use. She said her exposure to drugs began in her childhood in the Bel Air, California, home owned by her father.

"The first time I did cocaine I was 11," she said. "I was staying with my father and his wife at the time and my brother, and my father never made any bones about doing drugs in front of his children or later on sharing drugs with us. He taught me to roll joints when I was 10."

While she was acting alongside Bertinelli on "One Day at a Time," she continued to dabble in drugs and alcohol, and her drug use began to escalate along with her stardom.

She said that her father shot her up for the first time in her teens and that he was the one to give her step-by-step instructions on how to shoot cocaine. A few years later, just after she turned 18, Phillips was arrested when she was found collapsed on quaaludes on an L.A. street.

Phillips said her father's response was, "Congratulations! Now you're a real Phillips. Now you know that even though they caught you, the rules don't apply."

After watching Phillips tell her story to Winfrey, Bertinelli told Phillips she regretted not being there for her on-again, off-again friend.

"I was so wrapped up in the own drama of my life, because I dealt with substance abuse. I was saving myself, and that's not always right. I wasn't there for my sister," she said.

After everything that Phillips recalled happened to her at the hands of her father, she said, she doesn't hate him.

"I have to say that I loved my father, and I still do. I've been trying to come to terms with this very difficult past," Phillips told Winfrey.