(CNN) -- Jordan Belfi has a great job: He plays Adam Davies on the HBO show "Entourage," a comedy series that takes a look at the life of a young actor, Vincent Chase, and the old friends who surround him in Hollywood. 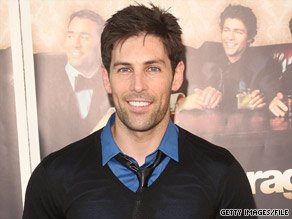 Davies is one of the few characters on the show who has the ability to shake one of the central figures: the unshakeable agent Ari Gold.

Belfi has been around since the early days of "Entourage" and remembers the humble beginnings of his character's career as an agent under Gold's direction.

Since that first season, Davies has risen to become Ari's chief rival on the show.

Belfi believes conveying the tension between him and Ari is easy, based on the great material he's given.

"It's a testament to the writing by Doug Ellin, the creator of the show. It's just on the page," Belfi said. "When you get setups and writing and dialogue and scenes that good, it makes your job that much easier."

CNN talked to Belfi, who's also in the movie "Surrogates" (opening Friday), about his experiences on the show and his inspiration for the role. The following is an edited version of the interview.

CNN: A lot of fans really missed that rivalry between you and Ari Gold. Talk a little about how you and Jeremy Piven kind of prepare for that and try to make that real on screen.

Belfi: Adam Davies has become ... one of the few characters on the show that really knows how to get under Ari's skin and push his buttons. Ari is an entertaining character, and it's fun to watch him go after things, but people really enjoy kind of when Ari's off balance.

That interplay, that back and forth, particularly the sort of thing that's happening now [on the show], the constantly one-upping each other, is just really fun to watch. It's entertaining. And I get that response from a lot of the fans of the show. They love Adam Davies for that reason because he just knows how to do it.

Jeremy ... [is] an actor with so much power and force and impact that you're sort of forced to up your game. You're really present in the moment. And when you're there and you're really going back and forth, that's when the sparks really fly.

CNN: Talk little bit about the inspiration you draw from to play Adam Davies.

Belfi: I started way back on season one in the beginning of the show. And back then, Adam Davies was still in his cubicle.

CNN: What are your thoughts on Adam Davies as a person?

Belfi: What gives Ari a little bit of his soul, his heart, is that we have all these scenes with his wife and his family, and you really get to see him as a dad. ... [But] we haven't gotten to see any of the personal life of Adam Davies. So I don't know if there's anything yet to kind of balance out those ruthless qualities he has.

But I think he's the kind of agent that I'd certainly like to have if you're that actor trying to go after that job. You want that agent who's going to beg, borrow and steal to help prove that you're the guy. So in that respect, it seems like he's someone you'd want on your side.

And the thing is, I think that's what made the rivalry between him and Ari so great. You know when he was coming up, he probably did a lot of the same things [as Ari] and ran over people in similar kinds of ways. They're really kind of the same in a lot of ways. So you're either best friends or mortal enemies when you share that much in common with somebody.

CNN: Exempting Davies, who's your favorite character on the show and why?

Belfi: Ah! Impossible question! I have to exempt Adam Davies from the answer? ...

If I absolutely, gun-to-my-head have to choose, there's a quality about [Chase's brother] Drama that I've always loved. And it was maybe more prominent in the first couple of seasons than it is now because it's evolved slightly.

The quality that I always found the most entertaining, is that Drama was always this mix of desperation and simultaneous pride. And that's really funny. You know at the beginning he was just scratching, begging for something, some chunk of the game or to get back in the game. But he simultaneously kind of knows it all. And that mix is a great comedic mix, comedic recipe. It was both funny and heartbreaking.

CNN: Of course, our diehard "Entourage" fans would love to get some scoop on the coming story lines. You've gotta give us something.

Belfi: A little something? Well, I don't think I'd be giving away too much to say that Adam might get Lloyd.

In terms of the story line, there's some stuff that I'm told with Drama and his going after this role on "Melrose Place" and the screen test for that role and the ups and downs of that. And also, some big things happen between Eric and Sloane.

But in terms of the really exciting stuff between Adam Davies and Ari, I guess I'll say this: At the end of season two, when Ari is trying to form his coup, to break up the agency, and Adam is the one who rats him out and gets him fired and humiliated and causes that whole thing ...

In the amazing way that Doug has constructed it, all that stuff from the end of season two comes full circle. There's this one thing that happens that will really stand out and that people will talk about. So some fun, exciting stuff to look forward to.