'Dancing' champ: No need for Abdul as judge

(CNN) -- It says something about the popularity of "Dancing With the Stars" that the show's professional dancers have become almost as famous as the celebrities they're paired with. 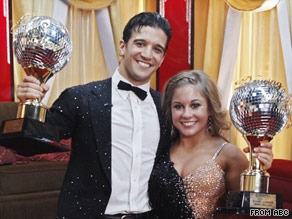 Take Mark Ballas, who last season waltzed and tangoed his way to a first-place finish with Olympic gymnast Shawn Johnson -- his second mirror ball trophy since he joined the hit series in 2007.

At just 23, Ballas is already recognized on the street, he's in a band with fellow "Dancing" pro Derek Hough, and he's thinking about branching out into acting.

For the new season of "Dancing With the Stars," which begins Monday, Ballas is paired with Melissa Joan Hart, best known for her roles in the television series "Sabrina, the Teenage Witch" and "Clarissa Explains It All."

Ballas spoke to CNN about his new celebrity partner, his training routine and whether former "American Idol" judge Paula Abdul could find a new home on the show.

CNN: What is Melissa Joan Hart like as a dancer?

Mark Ballas: She's doing really well so far. I think she's going to shock a lot of people, and I think they will love her personality. She's really bright and bubbly.

CNN: Does she have any dancing experience?

Ballas: No, she's never danced before. I mean, she took a couple of ballet classes when she was a child, but everyone's done that. She's never danced like this before, so it's been a bit of a learning curve for her, but hopefully she'll smooth it out.

CNN: Did you know who she was before you were matched?

Ballas: Oh, yeah. I used to watch her shows all the time when I was younger. I would watch "Clarissa Explains It All" and "Sabrina, the Teenage Witch" after school.

CNN: Do you get any input in what celebrity you are paired with?

Ballas: No, we get no choice whatsoever. It's basically [dependent on] whether they think our personalities will be compatible and also on height. You have to be the right height, because if someone is 6 feet and your partner is 5 feet, it won't work out.

CNN: How do you choreograph dances? Do you like to use certain routines over again?

Ballas: I start fresh every time. Having a good song is definitely helpful, and when you get a new song, it's really inspiring and makes you want to move, and that's the fun of it. You always want to keep things fresh, and I always keep challenging myself, like how can I outdo what I did last time?

CNN: The facial expressions seem so important in ballroom dancing. How do you teach that to your celebrity partners?

Ballas: That's something you can't teach. Obviously, you explain what the dance is and how you have to act and what you should be thinking, but you don't choreograph facial expressions. That's got to come from the heart and the soul, and you just have to feel it.

CNN: If you have a celebrity partner like Kim Kardashian, who was criticized for being wooden on the dance floor, is there anything you can do?

Ballas: The best thing to do is to make them feel comfortable. Kim got very shy when the cameras were on, and she would always dance a lot better off camera. But sometimes, dancing just isn't for certain people. Kim and I had a great time together and still are good friends to this day. But dancing wasn't her thing, she just didn't take to it.

CNN: Do you keep in touch with your former partners?

Ballas: Yes, I talk to Shawn [Johnson] and Kristi Yamaguchi all the time; I talked to Kim Kardashian about an hour ago. We stay good friends.

Kristi Yamaguchi was amazing to work with -- great temperament, really eager to learn, she was like a machine.

Kim Kardashian was a doll. We talk all the time, we hang out when we can, she's a lot of fun.

Shawn Johnson was just a joy to work with, from start to finish. Just an absolute sweetheart. We had a lot of fun, we laughed a lot.

CNN: A lot of people were surprised that actor Gilles Marini didn't win last season. What's your take on that?

I definitely feel like it was a fair result.

CNN: Your father, Corky Ballas, who is also a professional dancer, made quite a splash when he was paired with 80-something Cloris Leachman on "Dancing" last year. Is he coming back to the show anytime soon?

Ballas: I hope so. It was a lot of fun having him around, and I thought he was amazing, of course. They were a great team, absolutely hilarious. I'm sure if they ask him back, which I'm hoping they do, that he would definitely come back.

CNN: There were some suggestions that Paula Abdul might join the show as a judge. What do you think about that?

Ballas: I think that Paula would be great as a contestant. If she wanted to be on our show, she should come on to compete and be partnered with one of us.

As far as the judges, I love our judges. I think our judges are great, and I think we've got a great system, and I don't think there would be any need for an extra judge.

I love Paula -- I've met her several times because "American Idol" is right next door to us. I would love for her to come on the show and be my partner.

CNN: Are you recognized on the street?

Ballas: I have loads of people come up to me. They ask questions about the season. It's really nice, and I really appreciate it.

CNN: Your fellow pros on "Dancing," Maksim Chmerkovskiy and Karina Smirnoff, broke off their engagement recently. Is that going to affect the show in any way?

Ballas: We're all very professional. These things happen. It will definitely not affect the show, we'll keep on dancing. You won't even be able to tell.

I've talked to Max several times. He's doing OK. These things are never easy, and Max is a dear, dear friend of mine. I've known him for 13 years.

CNN: What are your career goals beyond dancing?

Ballas: I'm actually a guitar player and a singer/songwriter. I studied musical theater and music and vocals. Anything to do with music is definitely a big goal of mine. I've studied acting for 10 years, so I'd love to do film at some point as well.