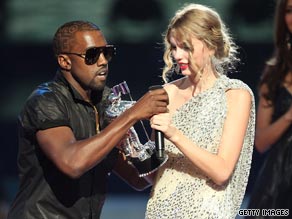 Kanye West takes the microphone from Taylor Swift at the 2009 MTV Video Music Awards on Sunday.

The pre-show buzz had focused on the highly anticipated tribute to the late Michael Jackson, but West's disruption stole the spotlight.

A giddy Swift was in the midst of her acceptance speech for Best Female Video when the often-mercurial West rushed onstage, grabbed her microphone and let loose an outburst on behalf of singer Beyonce Knowles, who had lost out in that category.

But audiences who stayed tuned until the end of the broadcast were treated to a touching bookend: Knowles, the night's top winner, invited Swift onstage and gave the teen singer her moment in the spotlight.

"I remember being 17 years old, up for my first MTV award with Destiny's Child, and it was one of the most exciting moments of my life," Knowles said, referring to the girl group with which she had her start. "So I would like for Taylor to come out and have her moment."

Speaking to reporters later, Swift was understated about her take on the disruption.

"I was excited to be onstage because I just won the award. And then I was excited that Kanye West was onstage. Then, I wasn't excited anymore," she said.

Best Video of the Year: "Single Ladies (Put a Ring on It)," Beyonce

Best Female Video: "You Belong With Me," Taylor Swift

Best Hip-Hop Video: "We Made You," Eminem

Best Video (That Should Have Won a Moonman): "Sabotage," Beastie Boys

MTV told journalists the West-Swift incident was not planned -- a point it had to stress after a walkout by singer Eminem at last year's event turned out to be staged.

Hip-hop superstar West, who was pictured before the ceremony swigging a bottle of Cognac, was escorted from the building after the rant, the network said.

Soon after, an apology to Swift appeared on his blog:

So went the 2009 edition of the awards, a show that is historically less remembered for its winners than for its antics.

And as usual, the Sunday night spectacle, hosted by a not-particularly funny Russell Brand, delivered:

• Pink dangled upside down from the rafters as she belted out "Sober" -- upping the ante from last year, when she shimmied down a bed sheet from a second-story fire escape.

• Lady Gaga, apparently pressing home her feelings about celebrity photographers, dabbed at fake blood that dripped from her ribcage and smeared it on her face as she sang "Paparazzi."

• And Swift took the subway, from the 42nd Street station to a stage outside the show venue Radio City Music Hall, all the while singing "You Belong With Me."

The ceremony was as much an awards show as a reverential tribute to Michael Jackson, who died on June 25.

Madonna got the evening off to a bittersweet beginning as she recounted how she forged a friendship with the singer and how they gradually grew distant.

"When Michael Jackson was 6, he became a superstar and was perhaps the world's most beloved child. When I was 6, my mother died," she began. "I think he got the shorter end of the stick. I never had a mother, but he never had a childhood."

After Madonna's tribute, an army of dancers re-created dance moves from several of Jackson's music videos.

As his single "Scream" beamed from a large overhead screen, Jackson's sister Janet came out and sang along to the only duet the siblings recorded.

The show also gave fans their first look at "This Is It," a behind-the-scenes documentary of Jackson's final three months. The two-and-a-half-minute trailer made clear the elaborate comeback show the singer was planning before he died.

But the much-publicized sneak peek was overshadowed by Kanye West's tantrum.

"Taylor, I'm really happy for you, and I'm gonna let you finish, but Beyonce had one of the best videos of all time," he said, snatching the microphone from Swift after she had won her award.

Swift stood onstage, speechless, clutching her award. The cameras panned to a shocked Beyonce, while the audience booed and later chanted "Taylor."

Though Beyonce later afforded the teen singer another opportunity to finish her speech, the West backlash had begun.

Pink's Twitter feed made several references to the incident. "Kanye west is the biggest piece of s--- on earth. Quote me," one tweet said.

Of course, West is no stranger to award show outbursts.

He made a similar uninvited appearance onstage at the 2006 MTV Europe Music Awards when he was snubbed for his single "Touch the Sky."

He leaped onstage, saying his video deserved to win because it "cost a million dollars and Pamela Anderson was in it."

On his blog Sunday, West pleaded his case: "I gave my awards to Outkast when they deserved it over me," he said, referring to the 2007 BET Awards, when he tried to give his trophy to the band.