(CNN) -- The AMC series "Mad Men" has been honored for its sharp writing, polished acting and engaging portrayal of life at a New York advertising agency in the early 1960s. 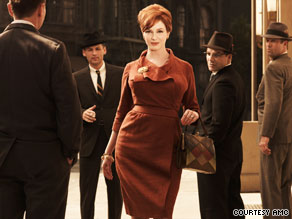 It has also been much noticed for something else: its fashion sense.

The series, which features all the looks of that era -- thin-lapeled suits and skinny ties, crinoline-puffed dresses and pencil skirts, Peter Pan collars and subdued pinks and greens -- has attracted attention from fashion designers and clothing merchandisers. Banana Republic, which has placed "Mad Men"-inspired clothes in its window displays, is even offering a walk-on role for the winner of a contest.

"Mad Men," which returns for its third season Sunday, isn't the first Hollywood creation to influence fashion trends. For decades, movies and television shows have played a primary role in dictating people's fashion choices, whether they've been aware of it or not. Here are a few examples.

1. In the 1934 film "It Happened One Night," star Clark Gable took off his shirt and showed his bare chest, instead of the standard white undershirt. For decades, an urban legend has maintained that undershirt sales dropped up to 75 percent, not to recover until World War II. Though the mythbusting site Snopes.com says the truth is uncertain, it's testimony to the legend's strength that we're still talking about it 75 years later.

2. The 1967 film "Bonnie and Clyde," with its (somewhat idealized) Depression-era fashion, continues to inspire today's designers. Faye Dunaway's berets, scarves, trench coats, fitted cardigans and long pencil skirts were a hit at the time and remain so today.

3. "Annie Hall" boldly showed women that the masculine preppy look was attractive. Star Diane Keaton wore baggy pants, dress shirts, a vest and tie in the 1977 Woody Allen film. The film is said to have influenced a spike in tie sales for women.

5. The 1983 film "Flashdance" made active wear -- like a ripped sweatshirt off one shoulder, tight leggings and leg warmers -- sexy for women in the early 1980s. Actor Jennifer Beals is said to have cut the collar off a sweatshirt that had shrunk in order to get it over her head, according to the Internet Movie Database.

6. The 1980s TV series "Miami Vice," with its lightweight fabrics and pastel colors, proved a hit on television and in menswear departments. Star Don Johnson's signature look -- T-shirt, suit jacket, linen pants and shoes worn sockless -- could be seen all over the country. (He also popularized the unshaven, stubble-bearded look.)

7. "Sex and the City" trendsetter Sarah Jessica Parker, who played Carrie, talked about her shoe addiction constantly during the HBO series, which ran from 1998 to 2004 and spawned a 2008 movie. Soon, stilettos -- paired with a thrown-together look -- became something the cool crowd of viewers would follow, along with brands such as Manolo Blahnik and Jimmy Choo.

8. A game show starting a fashion trend? It happened with "Who Wants to Be a Millionaire," which featured host Regis Philbin sporting a monochromatic shirt-and-tie look. Later, he launched a line of shirts and ties in the Regis by Van Heusen collection.