TAMPA, Florida (CNN) -- TV pitchman Billy Mays' death appeared to be from heart disease, not a bump to the head, according to the Hillsborough County medical examiner. 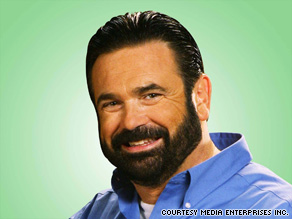 The final cause of death will not be known until after toxicology results are available, Dr. Vernard Adams said at a Monday news conference.

Mays, 50, was pronounced dead at his home near Tampa Sunday morning, after his wife Deborah found him unresponsive, Tampa police said.

"It's not uncommon to have a sudden death with this kind of disease," Adams said.

"Billy would be overwhelmed to see that his life touched so many people in a positive way," Deborah Mays said in a statement Monday.

"While it provides some closure to learn that heart disease took Billy from us, it certainly doesn't ease the enormous void that his death has created in our lives," she said.

Billy Mays had told a friend before he went to sleep Saturday he was not feeling well.

"He said he was groggy, he wasn't feeling that great. He wanted to get some sleep," Todd Schnitt said.

Mays was on a US Airways flight from Philadelphia that had a hard landing Saturday at Tampa International Airport after the front tire of the plane blew out.

After the flight, Mays told a Tampa TV station, "All of a sudden as we hit, you know, it was just the hardest hit, all the things from the ceiling started dropping. It hit me on the head, but I got a hard head."

Mays, with his booming voice, was famous for fronting products such as OxiClean and Orange Glo in TV commercials. iReport.com: Mays imitator meets the real thing

No evidence of exterior or interior head trauma was found during Mays' autopsy, Adams said.

The Discovery Channel -- which airs "Pitchmen" co-hosted by Mays -- issued a statement saying, "It is with incredible sadness that we have to report that Billy Mays died in his sleep last night. Everyone that knows him was aware of his larger-than-life personality, generosity and warmth. Billy was a pioneer in his field and helped many people fulfill their dreams. He will be greatly missed as a loyal and compassionate friend."

All About Billy Mays • US Airways Group Inc.