(CNN) -- Comedian and impersonator Fred Travalena died Sunday afternoon after a seven-year battle with cancer. He was 66. 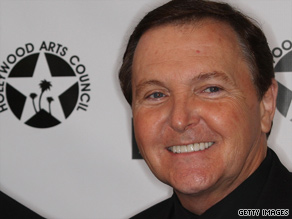 Comedian Fred Travalena had a 40-year career in show business.

Travalena -- known as "The Man of a Thousand Faces" -- died at home in Encino, California, surrounded by family, according to his publicist.

He was diagnosed with non-Hodgkin's lymphoma in 2002 and prostate cancer in 2003. Following five years' remission, the lymphoma returned in 2008.

"Since that time, he has been in and out of treatment, consisting of chemotherapy, surgery and radiation," spokesman Roger Neal said.

During Travalena's 40-year career, he entertained audiences with impressions of celebrities such as Frank Sinatra, Dean Martin and Bob Hope. He was a regular on the "Tonight Show," with Johnny Carson.

Travalena is survived by his wife of 39 years, Lois; sons Fred IV and Cory; daughter-in-law, Kelly; and a granddaughter.

Private services will be held this week, with a public memorial service to be announced later.

All About Johnny Carson • Frank Sinatra