Review: 'Dollhouse' needs to be filled up

(Entertainment Weekly) -- Joss Whedon's new series "Dollhouse" stars Eliza Dushku as Echo, a young woman who has signed on with the Dollhouse, an organization that "wipes" the minds of its buff employees, reprogramming their personalities to fit the desires of its wealthy clients. 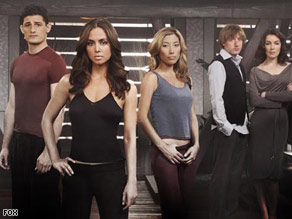 Eliza Dushku (second from left) stars as a kind of programmed actor on "Dollhouse."

The "dolls" can become anything from playful romantic partners for lonely guys to butt-kicking adventure junkies. In the first two episodes, Echo becomes both of these and more -- indeed, in the second installment, she both makes love to a client and kicks his butt.

This being the latest creation from Joss Whedon, master of sly subtexts, I'm immediately on the lookout for this series' organizing metaphor. In "Buffy the Vampire Slayer," for example, soulless bloodsucking was a stand-in for the agony of adolescent romance; in "Firefly," a scruffy band of space cowboys was Whedon's take on the broken nuclear family.

But "dolls" doing the bidding of their masters? Is this Whedon's ironic update of the cheerful work-enslavement of "Charlie's Angels"? The typically clever dialogue suggests it may well be, as when the Dollhouse is described as "cutting-edge technology in a house full of hot chicks."

In the premiere, Echo tries to rescue a kidnapped girl by assuming the identity of a "facilitator," complete with business suit and glasses that signify brainy. The Dollhouse is hired by the 12-year-old girl's father.

But why would he settle for a "wiped" woman like Echo -- whose personality has been assembled from parts of other people's personalities -- to get his daughter back, when he could go to any number of private investigators? Plus, the series' technogeek who oversees the re-wiping (a snarky hipster played by Fran Kranz) programs a flaw in Echo's new persona that causes trouble for this mission. That seems like an excessively elaborate setup, albeit for a darn good action climax.

I worry about "Dollhouse's" concept as a weekly show. If Dushku is always playing a different sort of character, sure, she gets to show off a wider range of acting chops than she did when she was the brilliantly broody Faith on "Buffy" and "Angel." But in effect, we have to start from scratch with each installment and buy into Echo's new personality. The result: no consistent hero to root for every week.

And yet, and yet ... Dushku's acting is dexterous and beguiling. Given the artfully vague hints of an intriguingly desperate past for Echo, as well as Whedon's track record, we ought to cut the show some slack. Let's see if Whedon can bring this doll to greater life.