(Entertainment Weekly) -- For nine years, "CSI" star William Petersen has had it all. And that was exactly the problem. 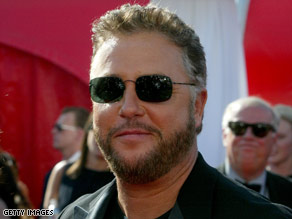 William Petersen says he's become "too comfortable" at "CSI," and that it's time to go.

"It's 'CSI' -- they pay me a lot of money, and I don't have to work very hard anymore. I've got it all figured out. And I just realized, God, as an artist, I'm going to atrophy. You do anything for nine years, it becomes somewhat rote. I didn't want to be on the show because they were paying me money and I liked the money. I didn't want to be on the show because it saved me from having to go look for other jobs. Just didn't want it. It was too safe for me at this point. So I needed to try and break that, and the way to do that, for me, is the theater."

So, with his final "CSI" episode scheduled to air Thursday on CBS, Petersen is saying goodbye to the show that made him very, very famous and very, very rich. He's now living in Chicago, where he's resumed a career as a theater actor.

Leaving fame and fortune behind in the name of artistic integrity? There's a novel concept for Hollywood. But still, isn't he just a little sentimental about parting ways with a character that has defined him since 2000?

As a producer on the drama since its debut in 2000 and an exec producer since 2004, Petersen is one of the highest-paid actors on television (earning a reported $600,000 per episode). Over the years, he's watched his show turn into a ratings powerhouse and -- with syndication and spin-offs -- a veritable billion-dollar industry for CBS, which will no doubt feel the pain of Petersen's departure.

Petersen has definitely left his mark on this crime scene. From the moment in 1999 when he persuaded creator Anthony E. Zuiker to change Gil's last name from Sheinbaum to Grissom, to the spring of 2007 when he began to map out his character's much-anticipated exit, Petersen has played a significant role in the direction of his hit show.

"The first day I met Billy, before filming the pilot, he said to me he wanted to re-create an ensemble feel of a theater company, to have that type of collaboration," says executive producer Carol Mendelsohn. "It's not the easiest road to take, to have true collaboration." However, she feels Petersen's insistence on teamwork "has been an essential element to our success, on every level."

Petersen, who's unapologetic about his occasional my-way-or-the-highway antics, says he wanted a producer title to ensure that the cast and crew always had an advocate. "Otherwise, it's completely unbalanced because everything is tilted toward the network and the studio and the writers. It can't just be generals. You have to have a few lieutenants. That's where I came in."

Naturally, then, it was Petersen -- and not producers or the network -- who decided when and where Grissom would finally step outside the yellow tape. "For years, Billy had been saying he wanted to go, so we knew that one day he'd ask to be written out," says Mendelsohn. "We had a game plan for a long time."

Petersen and the writers were set on hammering out an exit strategy that would seem organic to the world of forensic science. That's where the real-life Grissoms came into play. "You talk to all of the CSIs we know, and they all have a short [career] life," says Petersen. "They can do this for a while and then they all try to become techs (advisers) for our show! None of them want to go back down an alley and process fingerprints on a garbage can anymore."

The long goodbye officially began in November 2007, when Gil's fiancee Sara (Jorja Fox) fled Las Vegas for destinations unknown, and it continued with the tragic shooting death of Warrick (Gary Dourdan) in October of the following year.

Postponing his farewell not only put some much-needed space between the high-profile exits of Fox and Dourdan, it also gave the show's creative team plenty of time to find Petersen's successor. After putting out feelers to an impressive roster of stars (Kurt Russell and John Malkovich were approached), the producers set their sights on Laurence Fishburne, who hasn't starred on TV since playing Cowboy Curtis on "Pee-wee's Playhouse" back in the '80s.

While Fishburne is known on screen as a cool character, his first days on set last September -- as research pathologist--turned-college professor Dr. Raymond Langston -- revealed anxiety underneath that calm demeanor. "CSI's" Marg Helgenberger recalls how the 47-year-old actor rode his motorcycle to work on the first day and ended up clutching his helmet during a meeting with the writers.

"He said, 'I'm just gonna hang on to this because I'm kind of nervous,"' she remembers. "It was really sweet. I think he feels the weight of the challenge of taking over that part. I mean, obviously it's not the same part as Gil, but that character was indelible and well-liked -- all that stuff that Billy was."

Adds Fishburne, "Billy was the daddy of the whole thing and Daddy was leaving. Then in comes Uncle Fish. A lot of people didn't know what to expect."

When Petersen's final day of shooting arrived on October 10, about 200 members of the show's cast and crew assembled on the "CSI" soundstage to watch his character's last stroll through the dimly lit lab. Though everyone knew that Petersen wasn't gone forever -- he'll retain his producer title and he's promised to return for the occasional episode, though that probably won't occur until next season -- it didn't make his departure any less significant.

Co-star Helgenberger can't even think about the "painful" day without tearing up. "I couldn't stop crying," she says. "It was hard. I'm having a hard time now, because, you know, we had a great nine years together. It's just over. It's the end of an era."

First things first, though: The man with the beard still has to take his final bow, though nobody's revealing how. But an even bigger cliff-hanger is what will happen to the show after he's gone. "I'm sick he is leaving," says one EW.com poster named Betty. " 'CSI' is Gil."

Jasmine puts it more bluntly: "Once Grissom is gone from the original 'CSI,' so am I."

As he looks forward to the next chapter in his career, Petersen hopes viewers will adopt his attitude about Grissom's exit: no tears necessary.

"I think there's a way for the audience to remember him, like losing a great co-worker they've known for years," says the actor, who hasn't ruled out starring in another TV show -- someday. "He didn't die in a plane crash, he didn't get a brain tumor. He's out there."