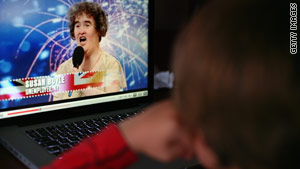 London, England (CNN) -- At the start of this year, none of us had heard of Susan Boyle. Now, in the Christmas sales rush, her debut album "I Dreamed a Dream" is the most pre-ordered CD in Amazon's history.

Already, the Scottish Internet sensation has been the subject of fervid tabloid attention. Catapulted to global fame by a British reality show, her fragile ego cracked when she lost the "Britain's Got Talent" final to a dance troupe and she was later admitted to The Priory, an exclusive London psychiatric clinic.

But now the furore is over, the studio sessions have come to a close and the world has one question for Boyle: Is she more than a seasonal novelty act, her minutes of fame close to expiry? Can the phenomenon known as "SuBo" deliver the goods?

Let's get this straight. Boyle's record is no joke. Admittedly, in places there's a tenseness and a naivety to her vocals, and her genre-skipping does make her album something of a hotch-potch crowd-pleaser, some might say cynically so. (Torch ballads? Check. Church music standards? Check. Pop classics? Check.) But she's deadly serious.

Mostly it works; occasionally it falls a little short. Her interpretations of hymnal music won't be worrying Katherine Jenkins et al any time soon, but they're prettily sung and smoothly produced. It's here she sounds most comfortable and most convincing, and there's a sweetness and a lightness which are all Boyle's own.

Elsewhere, the production lets her down. On the Monkees' "Daydream Believer," "The End of the World" and Rolling Stones classic "Wild Horses," her producers seem to be pushing a ballads-by-numbers view that slowing down a song makes it more meaningful. It doesn't.

Happily, "I Dreamed a Dream," the "Les Miserables" classic that made her name, still packs the SuBo punch. She is -- perhaps unsurprisingly -- unwavering and convincing in her portrayal of a person let down by life.

But the standout track is a cover of "Cry me a River." An old favorite of Boyle's, here she sounds relaxed, in control, even sultry, and finally shows off her voice's mellifluous timbre. It's the one song on the record where you don't imagine Simon Cowell nodding or shaking his head at her from behind the mixing desk.

Technically, Boyle does the job. Her voice is undoubtedly clear and younger than her years. "I Dreamed a Dream" aside, she's more a crooner than a belter at this stage. But can she sing? Yes. Is she outstanding? No. She's ... fine.

And that's the problem. Listening to Boyle's record feels strangely monochrome. Her fame's roots lie not in her talent, but in the few short minutes that she overturned our perceptions of those who deserve fame: she is a foil to the young and the beautiful.

Without seeing her dowdy frame standing in front of a microphone, the impact of her voice fades. It's not a pleasant lesson for us: if she were pretty, ordinarily pretty, she'd be a haphazardly employed cruise singer. She stands out by being remarkably plain.

She's a gift that's helping Cowell (did you see the dollar signs spin in his eyes when she first opened her mouth and sang?) kid us that the music industry rewards raw talent. It doesn't. She's an aberration, a glitch. We're not going to see more Susan Boyles shooting up the charts. We'll see more Pussycat Dolls.

Ultimately, none of this matters. As her presales show, Susan Boyle's fans were always going to buy this record. The rest of the world probably won't. But her fan base is significant enough to ensure that her recording and performing career will be as successful -- and as profitable -- as her own grip on reality will allow.

And that is her appeal. Her remarkable journey is testament to the challenges she's faced throughout her life. She'll release a number one Christmas album next year and fill concert halls around the world for the foreseeable future, not because she's one of the world's greatest singers, but because to her legions of fans, Boyle is a talisman and a signal that maybe, just maybe, their dream could also come true.