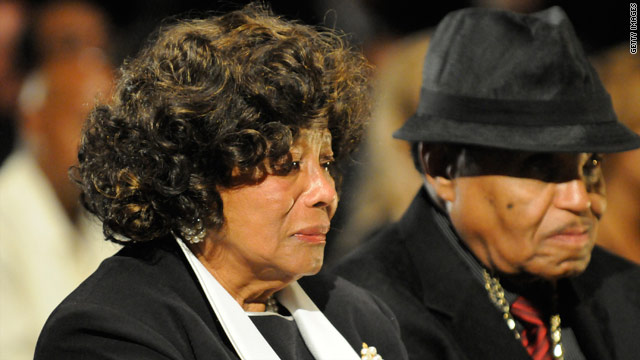 Los Angeles, California (CNN) -- Michael Jackson's mother dropped her challenge of the two men named as executors in her son's will, but her sudden reversal caught her husband by surprise Tuesday and led to a bitter fight in court.

In the end, the judge approved John Branca and John McClain as executors to run the pop star's estate and he ruled that Michael Jackson's father had no right to challenge the decision.

Joe Jackson, however, will have his day in court in December to argue that he should get a monthly allowance from his son's huge estate.

Katherine Jackson's change of heart came three weeks after she hired attorney Adam Streisand to replace the lawyers who were leading her four-month-long challenge of Branca and McClain.

"She feels that Mr. Branca and Mr. McClain have been doing an admirable job," Streisand said. "We're going to try to partner with them and work closely with them to make sure that the estate is doing the best that it can for the legacy of Michael Jackson, for the kids, most importantly."

Streisand said Katherine Jackson kept the decision a secret from the rest of her family until Tuesday.

It drew a harsh response from attorney Brian Oxman, who on Monday filed Joe Jackson's challenge of Branca and McClain. It was a fight that Oxman said Katherine Jackson had promised she would help wage.

"She has now reneged on her obligation to her family," Oxman told the judge. Joe Jackson's lawyer said Katherine Jackson's reversal was "one of the most despicable displays" he's ever seen in court.

Oxman accused Katherine Jackson of reaching a secret deal -- behind Joe Jackson's back -- with the men who control their son's estate.

Her lawyer fired back.

"That is not only baseless, but just a product of Mr. Oxman's imagination," Streisand said.

There was no deal and it was a surprise to the estate lawyers, he said.

"Before I announced my position, Mrs. Jackson and I were the only two people in the world who knew what I was going to say," Streisand said.

As for Joe Jackson's challenge for control, Streisand told the judge, "He has no right in the assets of the estate."

Until now, the Jacksons have painted a united public front in the battle over who controls the estate.

"Lawyer to lawyer, it was contentious between the two of us in there, in order to try to get things to come to a resolution," Streisand said after court.

"She doesn't wish in any way to be involved in any dispute or fight with him, but she wants to see things get moving along in a more cooperative way," he said, referring to Katherine Jackson and her husband.

Joe Jackson, 81, and Katherine Jackson, 79, have been married for 60 years but they live separately.

Joe Jackson is not named as a beneficiary in his son's 2002 will, but he filed a petition last week asking for an allowance from his son's estate to cover $20,000 in monthly living expenses.

Katherine Jackson is a beneficiary of the will, along with Michael Jackson's three children and unidentified charities, and she receives a monthly allowance as ordered by the court in July.

Howard Weitzman, the lead lawyer for the estate, said they would take her wishes into consideration in deciding their position on an allowance for Joe Jackson.

Judge Beckloff will hear his request for a monthly allowance on December 10.

Joe Jackson's petition to challenge the executors is dead, unless Oxman can resurrect it in a appeals court, which he told the judge he may try.

"I hope that an appellate court will agree with me," Oxman said.

Joe Jackson contended that Branca and McClain should be disqualified as executors because they hid from the court a mistake regarding Jackson's signature.

The signature section of the will said it was signed on July 7, 2002, in Los Angeles, although there is proof that Michael Jackson was in New York on that date, Oxman said.

The judge ruled that only a beneficiary, such as Katherine Jackson, is in a position to make the challenge.

The bulk of the cost went to Forest Lawn cemetery in Glendale, which was paid $855,730, including $590,000 for the crypt and monument inside the Holly Terrace section of it's Great Mausoleum, the document said.

Michael Jackson died on June 25, 2009, from what the coroner ruled was "acute propofol intoxication."